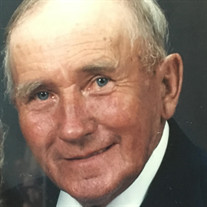 Adelbert F. Pease, 85, of Marengo, formerly of Gilberts passed away Friday, Nov. 2, 2018, in Elgin. He was born Dec. 2, 1932, on a farm in Plato Twp. the son of Fred and Elna (Nelson) Pease. Adelbert married Velma I. Schramm on Sept. 6, 1952 in Elgin. They farmed in the Gilberts area for over 40 years and for 12 years in the Plato Center and Burlington areas before moving to Marengo. Mr. Pease had been a volunteer firefighter for 20 years with the Rutland-Dundee Fire Protection District. Surviving are his five children, Fred (Debra) of Hampshire, Deb (the late Dan) Seyller of Hampshire, Mike (Debbie) of Hinckley, Diane (Kevin) Drake of Clare, and David of Marengo; 10 grandchildren; 8 great-grandchildren; and many nieces and nephews. He was preceded in death by his parents; his wife, Velma on Oct. 10, 2004; and four sisters, Bernadine Baumgartner, Arlene Engel, Velda Engel, and Merle Lohmaier. Funeral Services will be held at 11 am Thursday, Nov. 8 at the Fredrick Funeral Home, 284 Park St., Hampshire. Burial will follow in the Hampshire Center Cemetery. Visitation will be from 3 to 7 pm Wednesday at the funeral home and continues on Thursday prior to services from 10 to 11 am. In lieu of flowers, memorial contributions in his name may be directed to Independence Health & Therapy, 2028 N. Seminary Ave., Woodstock, IL 60098.

The family of Adelbert F. Pease created this Life Tributes page to make it easy to share your memories.

Send flowers to the Pease family.