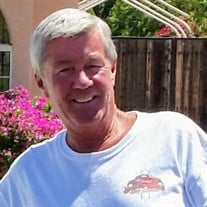 Carlton H. “Shorty” Wiese, 73, of Burlington Twp. passed away peacefully with his family at his side Thursday, Sept. 10, 2020, after a brief battle with cancer. He was born Oct. 13, 1946, in Elgin, the son of Walter and Emma (Weseman) Wiese. Shorty was a member of the 1964 Class of Burlington Central High School and married Kathy Turk in 1966. Together they raised two children, Kenneth, and Janet in Plato Center. Kathy passed away in 2000 and in 2004 Shorty married Mary Ellen Schmitz who had also been widowed. They had enjoyed 16 years together. Shorty had farmed in the Plato area and had served two terms as Plato Twp. Road Commissioner. He had also been a union truck driver for Schneider Trucking. His true passion was Street Rods and he enjoyed rebuilding numerous cars and trucks. He had been a member of the Down Shifters and the Goodguys Rod and Custom Assoc. as well as the Northern Illinois Steam Power Club. He was a wonderful husband, father, grandfather, and good friend. Surviving are his wife, Mary Ellen; daughter, Janet (Brian) Paulsen; granddaughters, Sophia and Alexandra Paulsen; grandsons, Ryan, Nicholas, Nolan, and Zachary Wiese; stepdaughters, Rene (Todd) Kahl, and their son, Mason, and Wendy (Darrin) Abbamonte, and their children, Anthony, and Cassidy; sister-in-law, Dorothy Wiese; and many nieces, nephews, and good friends. He was preceded in death by his parents; his wife, Kathy; son, Kenneth in Feb. of 2020; and his brother, Wally Wiese. Private Graveside Services for family only will be in the St. Charles Borromeo Cemetery. Please omit flowers, any memorial contributions if desired may be made to the charity of your choice.

The family of Carlton "Shorty" H. Wiese created this Life Tributes page to make it easy to share your memories.

Send flowers to the Wiese family.