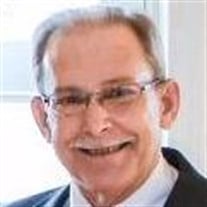 Christopher L. Golbeck, “Chris”, 65, of Woodstock passed away suddenly Thursday, June 27, 2019, in his home. He was born May 2, 1954, in Elgin the son of Bernard and Nancy (Scott) Golbeck. Chris was a member of the 1972 Class of Crystal Lake Central High School. He married Gloria J. Kastning on May 6, 1978, in St. Thomas Catholic Church in Crystal Lake. Chris was a newspaperman working for the Northwest Herald for 25 years becoming Director of Advertising. In recent years he had been an inspector for the McHenry Co. Housing Authority. He was a devout Catholic and was a member of St. Patrick Catholic Church in Hartland and formerly of St. Thomas in Crystal Lake. He has served as a Eucharistic Minister for the sick and disabled for many years. Chris was an avid golfer, former member of the Woodstock Country Club, and enjoyed many friendships that he made on the golf course. He was a Cubs, Bears, and Blackhawks fan. Surviving are his wife, Gloria; two sons he was very proud of, Matthew (Colleen) Golbeck, and Daniel Golbeck both of Woodstock; three grandchildren, Jared, Ella, and Grace; mother, Nancy; 5 brothers, Phillip (Jodi), Richard, John (Irene), Robert, Steven (Debbie); sister, Annette (Wayne) Petersen; his dog, Brazen; many nieces, nephews, cousins, extended family and good friends. He was preceded in death by his father, Bernard; and 2 sisters-in-law, Nancy and Shirley. Memorial visitation will be held from 4 to 8 pm Friday, July 5 at Schneider, Leucht, Merwin & Cooney Funeral Home, 1211 N. Seminary Ave. (Rt.47). Woodstock. Memorial Mass of Christian Burial will be celebrated at 11:00 am Saturday, July 6, at St. Patrick Catholic Church, Hartland. In lieu of flowers, memorial contributions in his name may be directed to the St. Vincent DePaul Society. Information call (847)683-2711 or online at www.fredrickfuneralhome.com

The family of Christopher L. Golbeck created this Life Tributes page to make it easy to share your memories.

Send flowers to the Golbeck family.