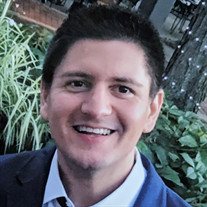 Christopher John Carl Pasquini, 31, of DeKalb, formerly of Hampshire, passed away Sunday, June 16, 2019, in DeKalb. He was born Nov. 23, 1987, in Hoffman Estates the son of John and Virginia (Chase) Pasquini. He was a member of the 2006 Class of Hampshire High School and a 2010 graduate of Western Illinois University. He was working as a Tech Support Specialist for Burlington School District #301. Chris was a huge fan of Star Wars, Jimmy Buffet, and Tenacious D among many others. He was also a huge movie buff and liked to say that he spoke fluent movie quotes. He also adored his dog and best friend, Rocky. His brother Kam had this to say about Chris: "He was kind without fail. When he loved something he loved it 110% and couldn’t wait for others to love it too. If he set his mind to something he was going to do it." Surviving are his mother, Virginia (Kel) Kissamis; father, John Pasquini; sister, Addie (Justin) Bowers; stepbrother, Kam (Katie) Kissamis; nephew, Chase; nieces, Sadie and Josie; and maternal grandmother, June Chase; aunts and uncles, Ken (Sue) Chase, Nick Chase, Christine (Mike) Trippi, Jessica (Juan) Avila; godparents, Marty and Candy O'Connell; and many cousins. He was preceded in death by his Papa, Carl Chase; uncle and aunt, Aldo and Ilva Pasquini; infant cousin, Patricia Chase; and several extended family members. Visitation will be Thursday, June 20 from 4 to 7 pm at the Fredrick Funeral Home, 284 Park St., Hampshire with closing prayers at 7:15 pm. Private interment will be on Friday at St. Charles Borromeo Cemetery. In lieu of flowers, memorial contributions in Chris’ name may be directed to the Animal House Shelter, 13005 Ernesti Rd., Huntley, IL 60142 or any Shelter of your choosing.

Christopher John Carl Pasquini, 31, of DeKalb, formerly of Hampshire, passed away Sunday, June 16, 2019, in DeKalb. He was born Nov. 23, 1987, in Hoffman Estates the son of John and Virginia (Chase) Pasquini. He was a member of the 2006 Class... View Obituary & Service Information

The family of Christopher John Carl Pasquini created this Life Tributes page to make it easy to share your memories.

Send flowers to the Pasquini family.