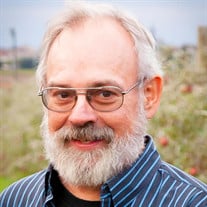 David George Bean, age 67, went to be with our Lord Friday, February 19th, 2021, at Sherman Hospital in Elgin. Dave was the oldest of four children born to George Earl Bean and Joyce Ellen Kraft Bean. He grew up on the family farm In Hampshire, Illinois surrounded by his sister, Susan, his two brothers, Jonathan, and Timothy, and their grandparents, aunts and uncles. Life on the farm was hard work but also interesting and fun. Dave told stories of bicycle races, and riding go-carts, building ramps and jumping the barn bridge hill. There were marathon Monopoly games with their neighbor, Dave Danner, and swimming in the pool after a day of picking up rocks in the field. Dave was a lifelong avid reader, able to consume a novel in a few hours. When Dave was older he rode dirt bikes and was known to occasionally buy an old car for a few dollars and drive it through the harvested fields with his friends. He had a lot of friends too, often they would all attempt to fit into his El Camino to ride around town after school which was strongly discouraged by the Hampshire Police Department. After Dave graduated from Hampshire High School in 1971 he completed classes at Elgin Community College before beginning his career as a machine builder and repairman. Dave was always interested in all kinds of machines. He said his best Christmas present as a kid was a 5 horsepower motor he received from his parents. Dave could fix anything and build it better. Dave worked in the same building at 365 Keyes Avenue, Hampshire, Illinois for 45 years. He worked for four different owners: Playskool, Essex, Hampshire Specialty Products, and WS Hampshire. Dave also worked at CustomPak in the evenings, built sap presses for Spectrum Technologies and machined parts for small businesses in his workshop at home. After the divorce of his first wife, Cheryl, Dave was learning to navigate life as a single dad of a toddler. Dave and his young son, Matt, lived in a house in town that he had purchased from his grandfather. A couple of years later Dave started dating Linda Yunker. They married on July 7th, 1984 at an outdoor wedding at the family farm in Hampshire. Dave, Linda and Matt lived in town until they, with the help of amazing friends, including Russ Broughton, built their house on Widmayer Road in 1986. Their daughter Samantha was born in 1987 and son Daniel in 1991. Dave and Linda loved their home and truly enjoyed being there, whether it was working in the yard, stacking wood or sitting on the patio. During recent years, as ”Papa”, Dave enjoyed time with his grandchildren. They fished in the pond, built simple wooden boats to sail down the creek, rode the 4 wheeler, and he would push the little ones on the tire swing. Dave was welcomed into Heaven by George, his dad; his sister, Susan; grandparents, aunts and uncles; his first wife; and dear friends, including Russ Broughton, and David Danner. Left to cherish his memory are his mother, Joyce; and his brothers, Jonathon (Jeannie), and Timothy; his wife, Linda; children, Matthew (Karen), Samantha (Richard), Daniel (Jennifer); grandchildren, Aubrey, Owen, Eli, Ryland, Elaina, Izaac, and Austin; and his aunts, and cousins, as well as many many dear friends. Services for Dave will be held at 3 PM Saturday February 27th, 2021, at Church On The Rock, 17N230 Manning Road, Huntley, Illinois 60142. Visitation will be held from 1:00 p.m. to 3:00 pm with a service immediately following. In lieu of flowers, cards and contributions may be sent to the Bean Family at 18N446 Widmayer Rd Hampshire, IL 60140

David George Bean, age 67, went to be with our Lord Friday, February 19th, 2021, at Sherman Hospital in Elgin. Dave was the oldest of four children born to George Earl Bean and Joyce Ellen Kraft Bean. He grew up on the family farm In Hampshire,... View Obituary & Service Information

The family of David George Bean created this Life Tributes page to make it easy to share your memories.

David George Bean, age 67, went to be with our Lord Friday, February...

Send flowers to the Bean family.