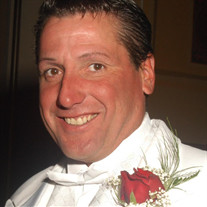 David E. Krueger, 57, of Marengo passed away Tuesday morning, Aug. 7, 2018 in Woodstock following a four-month battle with cancer. He was born Sept. 6, 1960 in Sycamore the son of Edward and Joan (Haderer) Krueger. David was a member of the... View Obituary & Service Information

The family of David Edward Krueger created this Life Tributes page to make it easy to share your memories.

Send flowers to the Krueger family.