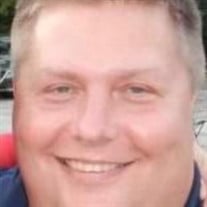 Dick Emil Polnow, 54, of Marengo, died Thursday, May 20, 2021, from complications of COVID at OSF Saint Anthony Medical Center, Rockford. Dick was born March 5, 1967, to Richard and Arlene (Schiller) Polnow in Woodstock. He worked hard his entire life starting at Freund International as a Mechanic. In 1989, he was employed with Marengo Disposal as the Shop Manager. From that position he became Division Team Leader with Waste Connections at the time of his death. Dick married his high school sweetheart, Suzanne (Brandt) Polnow in September, 1989. They resided in Marengo and Dick became a family man, his family and friends were always his top priority. He was an avid Dallas Cowboy fan, so much that each of his Rottweilers were named in connection with the Cowboys. He treasured his yearly camping trips to Devil’s Lake with family and friends. He loved music though he could not keep a beat. Dick was both generous and kind and supported all family members. He would lend a hand to any in need, and he will always be remembered with love and respect. Survivors include his wife, Suzanne (Brandt) Polnow of 31 years, sons; Shea and Cole Polnow; sisters, Dawn Colwell, and Denise (Pete) Frohling; brothers, Daniel Polnow (Shari), Douglas (Mary) Polnow, and Dennis Polnow; and many nieces, nephews, and special friends. He is preceded in death by an infant daughter, Morgan Polnow; his parents; and brothers, David Polnow, and Donald Polnow. A Celebration of Dick’s Life will be held on Sunday, June 6, 2021, from 1:00 – 4:00 pm at MDC Environmental Services, 1050 Greenlee St. Marengo. In lieu of flowers, memorials to the family for a fund to be established at a later date.

The family of Dick Emil Polnow created this Life Tributes page to make it easy to share your memories.

Send flowers to the Polnow family.