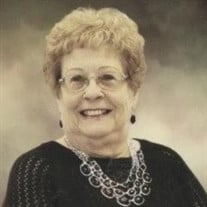 Dolores Joyce (nee Rohlwing) Schuring, 78, of Plato Township, passed away Tuesday, April 12, in her home after a battle with lung cancer. Dolores was born January 26, 1944, in Elmhurst, IL the daughter of Edmund and Loraine (Nebel) Rohlwing. The family moved to Hampshire in 1959 where she graduated from Hampshire High School in 1962. Dolores met her late husband, Warren, at St. Peter's Evangelical Lutheran Church of North Plato in 1961 where they later wed on October 20, 1962. They made their home together in rural Elgin where they raised their five children. They worked side-by-side running a dairy and agricultural farming operation from 1962-1972 and from 1973-2003 working and managing a milk distribution business started by Warren's father, Alvin, in the 1930's. Family was very important to Dolores. She selflessly gave her time to her family, church, and friends. She loved life itself and spending time with her grandchildren whether it was watching them play sports, fishing, or taking them shopping. In her free time, Dolores enjoyed reading a good book, shopping, playing dominoes and pinochle with friends, and traveling where she always strived to capture the perfect picture. Dolores was baptized and confirmed at St. Peter Lutheran Church in Schaumburg, IL. After her family moved to Hampshire, she transferred her membership and became an active member of St. Peter's Lutheran Church of North Plato. She served her Lord faithfully as a voting member, President/member of the Ladies Aide, Human Care committee, choir member, and the Monday Quilting Group for World Relief. She also organized an Altar Guild for the church and continued to serve on its committee. Dolores was also an active member of the Central District Baseball League where she served as a league officer and was also a representative to the Central Softball League. She helped start a concession stand in Plato Center. Dolores is survived by her children, Brian Schuring of Dixon, IL, Dale (Valerie) Schuring of Atwood, IL, Keith Schuring of Plato Township, LeAnn (Jeff) Stuehler of Hampshire, and Duane Schuring and his fiancé, Debbie Schulz of Maple Park, IL. She is also survived by her grandchildren, Kristofer Johnson of Arthur, IL, Justin (Ashley) Schuring of Schaumburg, IL, Tyler Schuring of Decatur, IL, Andrea and Ethan Stuehler of Hampshire, IL; and great-grandson, Braden Schuring of Schaumburg. Preceding Dolores in death are her parents, Edmund and Loraine Rohlwing; a brother, Ronald Rohlwing; her husband, Warren, in 2008; and her dear companion, Ken Bartels in 2020. Funeral service will be on Saturday, April 23 at 11 A.M at St. Peter’s Evangelical Lutheran Church, 43W301 Plank Road, North Plato, with the Rev. Thomas Eaves officiating. Burial will be at the North Plato Cemetery, Hampshire, IL. Visitation will be on Friday, April 22 from 4-8pm and Saturday, April 23 from 10 A.M until the time of service at St. Peter's Evangelical Lutheran Church of North Plato. In lieu of flowers, memorial contributions in her name may be directed to the St. Peter's Lutheran Church Benevolence Fund, Lutheran Church Charities, or Vitas Hospice.

Dolores Joyce (nee Rohlwing) Schuring, 78, of Plato Township, passed away Tuesday, April 12, in her home after a battle with lung cancer. Dolores was born January 26, 1944, in Elmhurst, IL the daughter of Edmund and Loraine (Nebel) Rohlwing.... View Obituary & Service Information

The family of Dolores Joyce Schuring created this Life Tributes page to make it easy to share your memories.

Send flowers to the Schuring family.