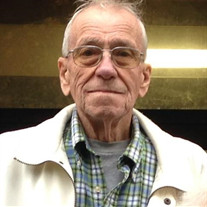 Donald R. Hennig, 86, of Plato Center, passed away Wednesday afternoon, April 24, 2019, in Elgin. He was born Oct. 15, 1932, in Elgin, the son of Thomas and Helen (Witt) Hennig. He was a member of the 1951 Class of Plato Center High School. Don was a US Marine Corps veteran serving in Japan during the Korean War. He married Lois C. Christensen on Oct. 26, 1952, in Vista, CA. Don was a longtime milk hauler, first hauling milk cans for Hank Rohrsen and later Country Delight out of Hampshire. He had been a former volunteer firefighter with the Plato Center Fire Dept. and was a proud member of the Hampshire VFW #8043. Surviving are his wife of 66 yrs., Lois; son, Randy (Laurie) Hennig of Hampshire; daughter, Sheri Hennig of Elgin; granddaughter, Molly Hennig; and a sister, Lois (Richard) Wood of Plato Center. He was preceded in death by his parents; and step-father, Walter Brier. Funeral Services will be held at 1 pm, Tuesday, April 30, at Fredrick Funeral home, 284 Park St., Hampshire. Burial with Military Honors will be held in the Plato Center Cemetery. Visitation will be prior to services from 11 am to 1 pm on Tuesday. In lieu of flowers, memorials contributions should be directed to Pingree/Countryside Fire District.

The family of Donald R. Hennig created this Life Tributes page to make it easy to share your memories.

Send flowers to the Hennig family.