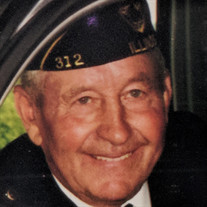 Edward “Bud” Neisendorf, 91, of Burlington passed away peacefully in his home Saturday afternoon Aug. 11, 2018. He was born Jan. 16, 1927 in Maple Park the son of John and Grace (Birkeneder) Neisendorf. He was a member of the 1945 Class of Maple Park High School. In June of 1945 he was drafted into the U.S. Army and served in post war Germany. On May 10, 1952 he married Betty Moser at St. Mary Catholic Church in DeKalb and they resided in Maple Park before moving to Burlington in 1954. He operated a dairy farm and when he quit milking cows he continued to grain farm and then he helped Glenn Lenschow with field work. He was a 72-year member of the Maple Park American Legion where he was a longtime member of a firing squad and a past Commander. He loved basketball, baseball and playing cards. He often talked about how he had played high school basketball against many of his Burlington and Hampshire friends. When Betty retired, they enjoyed seeing the USA, going to the boat (casino) and spending time with their children and their families. Bud will be greatly missed by his children, Bev (Louie) Thies, Rick (Judi), Daniel “Boomer” (Peg), David (Pam), Tom (Jody), Tim (Peg), and Dean “Farmer” (Jenny); 14 grandchildren, Samantha Thies, Andrea (Paul), Courtney, Alyson (John) Shipley, Abby (Kevin) Marshall, Amber (Andrew) Nolan, Adam, Rachel, Jacob, Mary, Erin, Jill, Danielle, and Christopher; 6 great-grandchildren, Raven, Brandon, Harper, William, Ava, and Grace; two sisters-in-law, Bonnie (the late Louis) Priwer, and Barb (Eric) Pinion; many cousins, nieces, nephews, good friends, and “son” Greg Coleman. He was preceded in death by is parents; wife, Betty on May 2, 2014; five sisters, Mary Eder, Helen Strausberger, Agnes, Fran Koenig, Babs Barsic; a brother, John Jr.; their spouses, and a granddaughter, Megan. A Celebration of Bud and Betty’s lives will be held at 11 am Saturday, Sept. 1, at St. Peter’s Lutheran Church, 43W301 Plank Rd, North Plato. Inurnment with Military Honors will be in the Burlington Union Cemetery. Visitation will be prior to services from 9:30 to 11am at the church. In Lieu of flowers, memorial contributions if desired should be directed to Make a Wish Illinois (Team Meg) or Kish Systems Hospice.

The family of Edward "Bud" Neisendorf created this Life Tributes page to make it easy to share your memories.

Send flowers to the Neisendorf family.