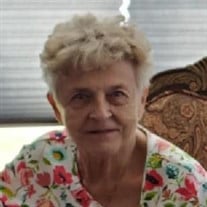 On Aug. 8th, 2020, Elmira Henrietta Hicks (nee Churchill) was called home to be with the Lord while in Sherman Hospital. Elmira was born on Jan. 11th, 1937, and raised in Humbolt Park in Chicago, the daughter of Elmer and Elizabeth Churchill, nee McCarty. She was the 1st of four girls born (Linda, Melissa, and Leona) and also a brother Jim from her father’s first marriage. She attended Catholic schools for her education as well as played accordion competitively. Elmira had 5 children from her first marriage. She married her husband James Hicks on August 9th, 1966, and added a sixth child in 1967. In 1970 they moved from Chicago to Hampshire and resided there until her passing. Elmira worked for 20 plus years at St Joseph’s Hospital as a CNA in the OB Ward and as a unit clerk on the 3rd floor until her retirement to watch grandchildren. While not working or taking care of kids, Elmira learned to can vegetables and jar jelly and jam winning several blue ribbons for her jelly at the Kane County Fair. She also learned to sew and was known to make quilts and blankets for her grandkids. Elmira was active at St Charles Borromeo Church having served as a Eucharistic Minister, CCD teacher, Vacation Bible School teacher, door monitor for CCD, and making Baptismal gowns. A favorite occurrence for her was seeing kids she had taught CCD for come up and talk to her having grown up. She was very independent until the end enjoying time with friends on the Hampshire Township Senior Bus going to the store or playing bingo or CLR for dimes. Elmira is survived by her sisters Melissa, Leona (Joe) Pena as well as her children Rick, Denise (Ralph), Steve (Nam Hui), Tom, and James (Deanna) as well as 9 grandchildren and 8 great grandchildren. She is preceded in death by her parents; her husband, James; her son, Brian; and her sister, Linda. Mass of Christian Burial will be at 10 AM Saturday, Aug. 15 at St. Charles Borromeo Catholic Church, 297 E. Jefferson Ave., Hampshire. Burial will follow in the church cemetery. Visitation will be on Friday from 4 – 8 pm at Fredrick Funeral Home, 284 Park St., Hampshire. Social distancing will be followed and masks are required. In lieu of flowers a donation in Elmira’s name may be made to St. Judes, St. Charles Borromeo Church, an animal rescue, or a charity of one’s choice as mom would be proud if people or causes were aided in her name.

On Aug. 8th, 2020, Elmira Henrietta Hicks (nee Churchill) was called home to be with the Lord while in Sherman Hospital. Elmira was born on Jan. 11th, 1937, and raised in Humbolt Park in Chicago, the daughter of Elmer and Elizabeth Churchill,... View Obituary & Service Information

The family of Elmira Henrietta Hicks created this Life Tributes page to make it easy to share your memories.

Send flowers to the Hicks family.