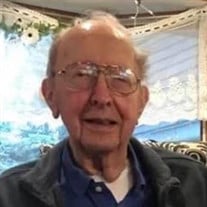 Ernest J. “Jack” Sell, 93, of Hampshire, formerly of Bartlett passed away early Friday morning, June 5, 2020, in Elgin. He was born March 23, 1927, in Sycamore the son of John and Dora (Kuhl) Sell. Jack was an Army veteran of WWII. He married Beverly Mae Pomazal on October 2, 1948, in Berwyn and they resided in Chicago for a few years. They later moved to the Bartlett/Elgin area where they raised their family for nearly 30 years. Jack and Bev later moved to Dundee for 10 years, Genoa for 10 years, and then Hampshire for the past 13 years. Jack was an excellent mechanic, learning the trade in the Army and worked for many years as a mechanic and service manager for the Ford Motor Co. After retiring from Ford, he built 3 houses and was an accomplished woodworker. Surviving are his wife of 71 years, Beverly; daughters, Cathy (John) Emrich, and Anita (Steve) Ream; son, Garry; 6 grandchildren, Julie (Scott) fowler, Amanda (Andrew) Jensen, David Emrich, Sarah (Christopher) Haney, Adam (Lauren) Ream, and Andrew (Jennifer) Ream; 7 great-grandchildren, Skylar, Ellie, Jaxson, Ezra, Brycen, Alyssa, and Ashley. He is preceded in death by his parents. Public visitation will be Monday, June 8 from 4 to 7 PM at Fredrick Funeral Home, 284 Park St., Hampshire. Face masks are required. Private Funeral Services will be held at 7:15 for the family. Following cremation, burial will be in the Hampshire Center Cemetery. In lieu of flowers, memorial contributions in her name should be directed to the Illinois Special Olympics.

The family of Ernest J. "Jack" Sell created this Life Tributes page to make it easy to share your memories.

Send flowers to the Sell family.