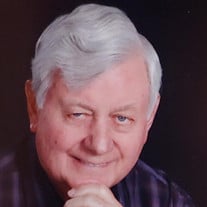 Gerald J. “Gerry” Neuzil, 84, of Sun City Huntley, formerly of Franklin Park passed away Christmas evening, Dec. 25, 2019, at Heritage Manor in Elgin after a long battle with Alzheimer’s. He was born Aug. 15, 1935, in Franklin Park the son of Jerry and Sophie (Matusek) Neuzil. Jerry married Charlotte T. Praxmarer on April 7, 1956, at St. Gertrude Catholic Church in Franklin Park before moving to Sun City in 2005. He was a Mason Contractor in Franklin Park for 41 years and a member of the Bricklayers Union, Local #56. He was a longtime member of St. Gertrude Church and was an avid golfer and bowler, playing mostly at Old Wayne Golf Club in West Chicago. Surviving is his wife Charlotte; five children, Michael (Linda), Teresa (Christopher) Cook, Denise (Adolph) Flowers, Pamela (Philip) Tuminaro, and Cynthia (Scott) Chalus; 12 grandchildren; and 3 great-grandchildren; a brother, Richard Neuzil; and sister, Nancy (Mike) Mariano. He is preceded in death by his parents. The Mass of Christian Burial will be celebrated at 11 AM Friday, Jan. 3 at St. Charles Borromeo Catholic Church, 297 E. Jefferson Ave., Hampshire. Burial will follow in the church cemetery. Visitation will be prior to Mass on Friday at the Fredrick Funeral Home, 284 Park St., Hampshire from 9 to 10:30 AM. In lieu of flowers, memorial contributions in Gerry’s name may be directed to the Alzheimer’s Foundation at www.alz.org

The family of Gerald "Gerry" J. Neuzil created this Life Tributes page to make it easy to share your memories.

Send flowers to the Neuzil family.