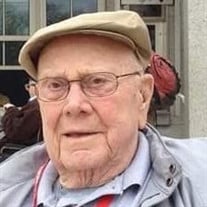 Gerald E. “Jerry” Stark, 97, of Hampshire passed away Sunday afternoon, March 24, 2019, in DeKalb. He was born Jan. 17, 1922 in Mayfield Twp., IL the son of Fred and Mary (Orner) Stark. He was a member of the 1939 Class of Kingston High School. Jerry was a U.S. Army Air Corps veteran of WWII attaining the rank of sergeant. He married Dorothy Bishopric on June 19, 1943, while in service. Dorothy later passed away tragically in a car accident Jan. 4, 1958. Jerry then married Beverly Koch on Oct. 10, 1958. He was a lifelong truck driver beginning his career with his father driving livestock into the Chicago stockyards. During WWII he was a truck driver in the Army Air Corps driving trucks on the Burma Road. After the war, he resumed driving truck and in 1959 he purchased the Phillips 66 station in Genoa which he ran for 7 years. He later resumed his trucking career with Burren Transfer in Elgin retiring in 1982. Jerry was a charter member of the Kingston American Legion and a member of Zion United Methodist Church in Hampshire. He was an avid Cubs and Bears fan. Surviving are a son, Donald (Sandra Warf) Stark; daughter, Mary Jo (Larry) Winn; two grandchildren, Emily Lange, and Benjamin Winn. He was preceded in death by his parents; first wife, Dorothy; and second wife, Beverly on Sept. 16, 2012. Graveside Cremains Burial with Military Honors will be at 1 PM Monday, April 1, at the Hampshire Center Cemetery. In lieu of flowers, memorial contributions in his name may be directed to the Burlington-Hampshire Food Pantry, PO Box 651, Hampshire, IL 60140.

The family of Gerald E. Stark created this Life Tributes page to make it easy to share your memories.

Send flowers to the Stark family.