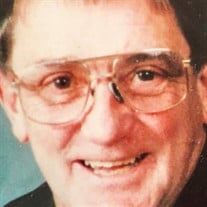 Gordy E. Lee, 84, of Marengo, died Tuesday, March 19, 2019, at Northwoods Nursing Home in Belvidere. Born October 31, 1934, in Elkhorn, WI the son of Oscar E. Genke and Peggy (Grimm) Lee. Served in the United States Marine Corps from 1952-1960 as an airplane mechanic. On Nov. 25, 1977, he married Helen Fiepke in Marengo. Gordy had lived in Marengo most of his life, working for Arnold Engineering where he carried several titles from a grinder to a foundry engineer. He retired in 2000 after 47 years, as the employee with the most years of service. He is also well known to the Marengo community as being an original charter member of the Marengo Rescue Squad that was organized in 1960. He served as Chief for a number of years and as the Civil Defense Director. After going through extensive training and schooling, Gordy became one of the original paramedics for the rescue squad. He retired in 1999 after 38 faithful years of service. He was sure to find the time, before and after retirement, to go fishing with his good friend, Ron Brehm, cheer on the Cubs and the Bears and cherished time with his family, especially his grandchildren and great-grandchildren. Survivors include his wife of 41 years, Helen; children, Gerald Lee, Cathy (John) Volpe, Teri Becker, Mark (Mary) Madaus and Kevin (Renee) Madaus; 12 grandchildren, Jason Volpe, Renee Becker, Nicole Ticknor, Luke Madaus, Helen Madaus, Amber Madaus, Rebecca Madaus, Lee Madaus, Michael Madaus, Kimberly Laskowski, Amanda Lee and Rachel Lee; 15 great-grandchildren; brother, Larry (Debra) Lee and their children. Preceded in death by his parents and son, David Lee. Visitation, Thursday, March 28, 2019, from 4-8 p.m. at Zion Lutheran Church, 412 Jackson St. Marengo with a Rescue Squad and Fire Department walk through at 6 p.m. Visitation continues on Friday, March 29, 2019, at the church beginning at 10 a.m. Funeral services to be held at 11 a.m. with Rev. Stewart Schulz officiating. Interment services will be held privately in Highland Memorial Gardens, Belvidere. In lieu of flowers, memorials may be made in his name to Marengo Rescue Squad, Heartland Hospice, or Zion Lutheran Church.

The family of Gordy E. Lee created this Life Tributes page to make it easy to share your memories.

Customized sympathy cards. Mailed for you.