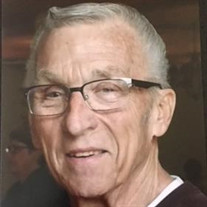 James R. Henning, 73, of Huntley, passed away peacefully surrounded by his family on Monday July 9, 2018. He was born on May 15, 1945 in Elgin the son of the late John L. and Louise A. (Kahl) Henning. On October 30, 1965 in Harmony, he married Sharon L. Fees. Jim dedicated his life to the Lord and his family here on earth. From the family farm in Huntley, IL Jim attended Concordia High School and College in Milwaukee, WI. After College he married his love, Sharrie, and built there home on the family farm. He became a Tool & Die maker at Woodstock Die Casting and then retired from his home-based business “Country Tool” in 2017. The Lord gave Jim the gift of creativity for making unimaginable pieces of art from both Metal and Wood. He also had a passion for gardening, animals, and capturing life’s moments from behind the lens of a camera. Survivors include his wife Sharrie, Four children: Tammy “Jerry” Boxleitner, Jackie “Jay” Loeffel, Amy “Nick” Bokowy and James “Shari” Henning. Seven grandchildren: Jake and Evan Boxleitner, Ryan “Sarah “ Loeffel, Kelli “Bryan” Zuidema, Cole, Cade, and Megan Bokowy. Great grandchildren: Hannah and Molly Loeffel, Brady, Mason, Ruger, and Lilah Zuidema . Brother: John F. Henning and Sister Bernice Hoffman. He was also preceded in death by his sister-in-law Carol (Shadle) Henning and his brother-in-law Howard Hoffman. Memorial service will be held at Zion Lutheran Church 412 Jackson Street Marengo, IL 60152 on Friday July 13, 2018 at 11:00 am. Visitation will be held from 4 to 8 pm on Thursday and 10 to 11am Friday, at the church. Interment will be at the Harmony Cemetery following lunch. Memorials may be made in his name to Zion Lutheran Church or to Henning Family Endowment Concordia University12800 North Lake Shore Drive Mequoen, Wisconsin. 53097

The family of James R. Henning created this Life Tributes page to make it easy to share your memories.

Send flowers to the Henning family.