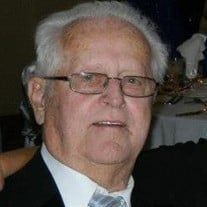 James W. Setter, 90, of Hampshire passed away early Monday morning, Sept. 9, 2019, in his home. He was born Dec. 21, 1928 in Chicago the son of Walter and Margaret (Bonfield) Setter. He served in the Army after WWII and was stationed in Japan for 1 year. Jim was married to Margot Kettering for 30 years and they raised their family in Carpentersville until her death in 1984. He later married Elaine (Binz) Goff in 1987 and resided in Hampshire. Jim was a longtime truck driver for both Midwest Plating and Burren Transfer. He also drove the band trailer for the Dundee Scots Marching Band for many years. He was a member of the St. Charles Borromeo Catholic Church, Hampshire VFW Post #8043, a former member of the Carpentersville Moose, a former trustee for the Hampshire Cemetery Board, and proudly drove the Senior bus for Hampshire Township. Jim loved ice cream and was very proud of his visiting over 50 different Culvers locations. He also loved spending time at his summer home in Wisconsin. Surviving is his wife, Elaine; 6 children, Susan (Dennis) Daehler, Joanne (Daniel) Rupp, Thomas (Anne) Setter, Peggy (Dan) Setter-Haderly, Terri (Dave) Slotty, Chuck (Angie) Setter; 4 stepchildren, Richard (Helena) Goff, Karen Goff, James (Vicky) Goff, Doug (Barbara) Goff; his mother-in-law, Vera Binz; 24 grandchildren; 39 great-grandchildren; and 17 great-great-grandchildren. He is preceded in death by his parents; a brother, Robert Setter; and stepson, David Goff. The Mass of Christian Burial will be celebrated at 11 am Thursday, Sept. 12, at the St. Charles Borromeo Church, 297 E. Jefferson Ave., Hampshire. Burial with Military Honors will follow in the St. Charles Borromeo Cemetery. Visitation will be from 3 to 8 pm Wednesday at Fredrick Funeral Home, 284 Park St. Hampshire. In lieu of flowers, memorial contributions in his name may be directed to the Hampshire VFW for the new Veteran’s memorial at Seyller Park in Hampshire.

James W. Setter, 90, of Hampshire passed away early Monday morning, Sept. 9, 2019, in his home. He was born Dec. 21, 1928 in Chicago the son of Walter and Margaret (Bonfield) Setter. He served in the Army after WWII and was stationed in Japan... View Obituary & Service Information

The family of James W. Setter created this Life Tributes page to make it easy to share your memories.

Send flowers to the Setter family.