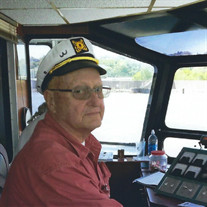 John W. “Jack” Herrmann, 81, of Hampshire passed away Friday evening, January 31, 2020, at home with his family at his side. He was born May 6, 1938, in Elgin the son of John and Betty (Leffelman) Herrmann. He married Diane Baseley on April 8, 1959, in Hampshire and was a lifelong resident of Hampshire. Jack was an employee of the Kane Co. Highway Dept. for 23 years. He was also a 40-year member of the Hampshire Volunteer Fire Dept. rising to the rank of Captain. Jack was also the custodian of the Hampshire Twp. Cemeteries working first with his father, John and then serving the area cemeteries for 40 years. The care of his duties resulted in the excellent maintenance that has been a great benefit to the Hampshire Community. Surviving are is his wife, Diane; children, Jeff (Bob) Herrmann of Lakewood, OH, Kim (Jim) Greenwell of Crystal Lake, and Hampshire Fire Chief Trevor (Dianne) Herrmann; 5 grandchildren, Erin (Jake) Ziller, Andrew (Amy) Heine, Mallory (Dustin) Keenan, Lauren Herrmann, and Ryan Herrmann; 7 great-grandchildren, Jeremy, Heston, Brody, Sienna, Jax, Cole, and Weston; a sister, Bettie Smith; and brother-in-law, Mike (Sue) Baseley. He is preceded in death by his parents. Per Jack’s wishes, he was cremated and there will be private memorial services for family at a later date. In lieu of flowers, memorial contributions in his name may be directed to the Hampshire Fire EMS Assoc., P.O Box 245, Hampshire, IL 60140

The family of John "Jack" W. Herrmann created this Life Tributes page to make it easy to share your memories.

Send flowers to the Herrmann family.