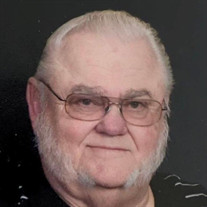 John Lockhart, 83, of Marengo, was called by the Lord on April 13, 2021. He was born on March 29, 1938 in Belvidere, Illinois to the late Richard Lockhart and the late M.A. Elizabeth (Schwab) Lockhart. He married his high school sweetheart, June C. Pollock on April 26, 1958 at St. John’s Lutheran Church, Union. They would have celebrated 63 years of marriage. John graduated Marengo Community High School. A life time Marengo resident, John was badge #3 for Marengo Rescue Squad and served as their first president. He was a Charter Member and played a significant part of the creation of Marengo Rescue Squad as well as adapting and modifying vehicles for their use. Much of that was done at his personal residence. John later owned and operated Marengo’s Citgo Station which was located on the corner of Maple Street and Route 20. For 43 years he owned and operated John’s Auto & Truck Repair until his retirement on November 8, 2008. He never shied away from a tow and was relied upon, at the time, to tow most anything out of most anywhere. John is survived by his loving wife and most competitive fishing partner, June; son, Jeffery Lockhart, and daughter, Jodi (Charles) Wightman all of Marengo. Grandson’s, Ryan (Heather) Lockhart, Jeremy Lockhart, and Colton Wightman; great-grandson's, Tucker, Finnegan, and after all boys, he was blessed with a great-granddaughter, Bailey Lockhart. John is also survived by his only sibling, Donald (Suzanne) Lockhart. John’s greatest joy was his family especially his grandson’s. He granted them nicknames at birth: Butchie, Bubba, and Peanut. Spending time with them fishing on the boat or watching NASCAR brought John the greatest joy. Memories of these days with "Poppie" will be treasured all of their life. They were official operators of the beloved family golf cart still in use today. He absolutely adored his three great grandchildren and they were loved beyond measure. Visitation will be 3 to 6 p.m. Sunday, April 18, 2021 at St. John’s Lutheran Church, 6821 Main Street, Union, with a Marengo Fire Department and Marengo Rescue Squad personnel walk thru at 4 p.m. Visitation will continue Monday, April 19 at 9 a.m. at church followed by the funeral service at 10 a.m. with Pastor Caleb Schauer officiating. Interment will follow the service in Marengo City Cemetery. In lieu of flowers, memorial gifts in John’s name may be made to Marengo Rescue Squad, 120 E Prairie Street, Marengo IL 60152 or St. John's Lutheran Church, 6821 Main Street, Union, IL 60180.

John Lockhart, 83, of Marengo, was called by the Lord on April 13, 2021. He was born on March 29, 1938 in Belvidere, Illinois to the late Richard Lockhart and the late M.A. Elizabeth (Schwab) Lockhart. He married his high school sweetheart,... View Obituary & Service Information

The family of John Lockhart created this Life Tributes page to make it easy to share your memories.

John Lockhart, 83, of Marengo, was called by the Lord on April...

Send flowers to the Lockhart family.