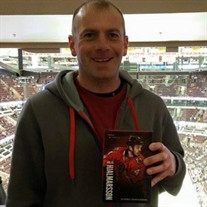 Joseph P. “Joe” Hosey, Jr., 45, of DeKalb, IL, passed away Tuesday, January 4, 2022, at Kishwaukee Hospital after his valiant battle with cancer. He was born November 24, 1976, in St. Charles, IL the son of Joseph Sr. and Diane Hosey. Joe was a loving son, brother, uncle, and friend. His kind nature, undeniable humor, and loyalty was unsurpassed. Joe graduated from Burlington Central High School in 1995, where he was a three-sport athlete and excelled in all of them. Along with being an avid sports enthusiast, he also participated in many fantasy football leagues where his competitive nature would shine through. Joe was a collector of sports memorabilia, comic books, Nike shoes, and vintage beer signs. He loved decorating the house at Christmas time, playing golf, and working side by side with his dad chainsaw carving. Even though he did not have any children, Joe cherished all his nieces and nephews as if they were his own. He is survived by is parents, Joseph and Diane; sister, Kristina (Gordon) Porter; brother, Matthew (Amber) Hosey; nieces and nephews, Kailey & Grant Porter, and Jada & Mason Hosey; and grandparents, Lawrence and Barbara Mattes. A Celebration of Life will be held at 2 PM on Sunday, January 9, at the Burlington United Methodist Church, 195 West Center St. in Burlington. The family wishes to thank Northwestern Kishwaukee Cancer Center and the ICU for their care for Joe. The Family request no flowers, memorials in Joe’s name may be directed to Fredrick Funeral Home, PO Box 445, Hampshire, IL 60140-0445.The memorial fund is being setup to support the Burlington Central Athletes.

The family of Joseph Peter "Joe" Hosey Jr. created this Life Tributes page to make it easy to share your memories.

Customized sympathy cards. Mailed for you.