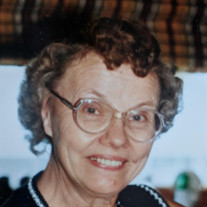 Joyce E. Volkening, 86, of Burlington passed away peacefully on June 8, 2018 at home. She was born April 28, 1932 in Plato Center, IL the daughter of the late Bernhard and Frieda (Vierig) Rabe. Joyce grew up on her family farm in Plato Center until she married the love of her life, Donald V. Volkening in 1951. They enjoyed almost 45 glorious years of marriage together before Don’s loss to his battle with cancer. They began their journey farming in Huntley until they purchased their own farm in Burlington, where they lived the rest of their lives. Joyce was a farm wife in every sense of the word. There isn’t a tractor she couldn’t drive, an animal she wouldn’t raise, or a vegetable she wouldn’t grow. She will be most remembered for always being the first in line to help anyone if she could, as well as a loving wife, mother, and a fabulous cook. No one could ever turn down her mouth-watering desserts! As if farming and gardening didn’t keep her busy enough, Joyce devoted much of her life to assisting their eldest child, Rod, who was born with Spinal Bifida. It came as no surprise to anyone who knew her that she would insist on taking care of Rod herself- whom she tirelessly tended to, without ever a complaint. Rod lost his battle to many health problems in 2008. Joyce was a member of St Peters North Plato Church and King of Glory Church in Elgin. She is survived by her two children, Larry of Burlington, and Linda (Kalman) of Elgin; along with three grandchildren, Stephanie, Marissa, and Stephen; as well as her loving friend and companion, Sylvia, who helped make her last years truly enjoyable. She was preceded in death by her parents; husband, Don; son, Rodney; and many beloved family members. Visitation will be held Thursday, June 14 from 9:30 until the 11 am Funeral Service at the Fredrick Funeral Home, 284 Park St. Hampshire. Burial will follow in the Burlington Twp. Union Cemetery. Memorials in her name may be made to JourneyCare Hospice Organization.

Joyce E. Volkening, 86, of Burlington passed away peacefully on June 8, 2018 at home. She was born April 28, 1932 in Plato Center, IL the daughter of the late Bernhard and Frieda (Vierig) Rabe. Joyce grew up on her family farm in Plato Center... View Obituary & Service Information

The family of Joyce Volkening created this Life Tributes page to make it easy to share your memories.

Send flowers to the Volkening family.