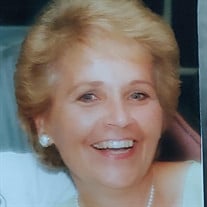 Judith M. “Judy” Klein, 75, passed away peacefully in her home Wednesday evening, July 28, 2021, surrounded by her family. She was born October 7, 1945, the daughter of Robert and Esther (Jordan) Williams. Judy graduated from Carmi High School and then attended Southern Illinois University where she met her future husband, Randy. Randy and Judy were married on December 17, 1966, in Carmi, IL. She moved with Randy to Burlington where together they established Klein’s Quality Produce. Judy was adored by employees and customers for her endearing kindness, beauty, and spirit. Judy was an active member of the Burlington Methodist Church where she taught Sunday School, played piano, was a member of the choir, and the United Methodist Women. She was an integral part of the Annual Farm Bureau Days educating young elementary children of the importance of agriculture. She is survived by her four children, Matthew (Christine), Pamela (Scott) Shearrow, Sheri (Nicholas) Morris, and Daniel (Toni); 9 grandchildren, Alexander (Krista) Klein, Samuel (Brianna) Klein, Jonathan Klein, Austin (Katie) Kinman, Caleb (Ashley) Shearrow, Tyler Shearrow, Margaret, Seraphina & Elijah Klein; 3 great-grandchildren, Henry, Emma, & Jack Klein; and sisters-in-law, Charlene Klein, and Sandra Schubbe. She is preceded in death by her parents; her brothers, Robert & Richard Williams; and her husband, Randy. Funeral Services will be held at 11 AM Saturday, August 7 at the Burlington Methodist Church, corner of Center and South St. in Burlington with Pastor David Seyller officiating. Burial will follow in the Burlington Twp. Union Cemetery. Visitation will be on Friday, from 3-7 PM at the church and continues on Saturday prior to services from 10-11 AM. In lieu of flowers, memorial contributions in her name may be directed to the Burlington Methodist Church or Northwestern Mesulam Center for Cognitive Neurology and Alzheimer’s Disease PPA Research and Education Fund, 420 Superior, Rubloff 9, Chicago, IL 60611 or www.brain.northwestern.edu/about/giving.html.

The family of Judith M. "Judy" Klein created this Life Tributes page to make it easy to share your memories.

Send flowers to the Klein family.