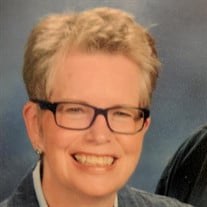 Hampshire — Julie Ann Mustard, 65, passed away Friday, May 18 In her home, she was the victim of an aneurysm that flooded her brain with blood while she was sleeping. Julie was born in 1952 to the late Ruth and Claude Vander Pal at the Woodstock Hospital. After Claude passed way, Ruth married Bill Seaver, and Julie changed her last name to Seaver when Bill adopted her. She is survived by brothers, Ben, Stanley, Steve, and Terry. Her brother, Michael and sisters, Kathy and Claudette preceded her in death. In 1982 Julie was living in Gold Hill, Oregon when she was introduced to John Mustard. It was an instant and extraordinary meeting of soulmates, and they were married in Grants Pass, Oregon June 29, 1983. Their new melded family included, Tim (Rebecca), Jason (Jessica), and Jeremy (Tone) from John's earlier marriage, and Tracy (Josh Kuhn), and Rod (Vergieanna) from Julie's previous marriage. Those children were the lights of Julie's life as they grew up. All five are now adults and have met and married their soulmates, and they have delighted Julie and John with 11 of the most wonderful grandchildren a proud grandparent could hope for. Julie's large family includes many nieces and nephews, who have their children, and in some cases, grandchildren. Julie doted on all of them, and they returned her devotion with their own love and affection. Julie was a long-time project manager for Cigna Insurance and before that, Cigna's subsidiary Intracorp. She retired two years ago but missed her work and team mates so much that she signed back on as a part time Encore Employee. She loved her job, and especially her team and manager, who she often bragged are some of the most talented and successful employees in the vast Cigna organization. Julie believed strongly in organ donation, and Gift of Hope was able to match her donation with five people in desperate need of transplants. She would hope that you will make the same important commitment. She also loved the work of The Animal House Shelter in Huntley, IL, and would hope that you could help support them with a donation. Julie's memorial service will be held Saturday, May 26 12 Noon at Fredrick Funeral Home, 284 Park Street in Hampshire. Visitation at 10 am, a memorial service at 12 noon, followed by a celebration of Julie's life with a lunch/picnic at their home, 280 Grove Avenue in Hampshire, just a few blocks away.

Hampshire &#8212; Julie Ann Mustard, 65, passed away Friday, May 18 In her home, she was the victim of an aneurysm that flooded her brain with blood while she was sleeping. Julie was born in 1952 to the late Ruth and Claude Vander Pal at the... View Obituary & Service Information

The family of Julie Ann Mustard created this Life Tributes page to make it easy to share your memories.

Send flowers to the Mustard family.