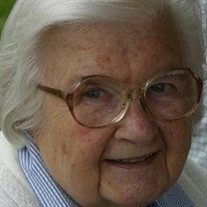 June Medina passed away peacefully on December 27, 2018 in Elgin, Illinois surrounded by love of her family. June Caroline Alma Lorenz was born on June 3rd, 1926 in Pingree Grove, IL. Pingree Grove was also where June met Bernard Medina, whom she married on April 14, 1951. There, they chose to raise their eight children. She lived her entire life in Pingree Grove, apart from her final year. Her sense of community and passion for charity was known around town. June was not only the matriarch of the Medina family, but also the heart and soul of Pingree Grove. Her house was a home where all were welcome and embraced with the love of family. June lived her professional life as an orthopedic nurse, after graduating from the Sherman Hospital School of Nursing in 1950. She will be remembered for being a comforting and compassionate caretaker to her patients, her husband Bernard, and her children. June will mostly be remembered for her warm soul and loving nature. Her wit and wry sense of humor, along with her joyful belly laugh, would make anyone around her smile. No matter the hardship in her life, she rose above it with tenacity and grace. Whether it was told by her directly, or by way of eating macaroni and cheese with her grandchildren with a toothpick, or by way of a homemade pair of slippers, those around June knew they were loved. June’s love and kindness will be missed by all who knew her. June was fiercely devoted to her beloved husband, Bernard and their loving family. She is survived by Linda (Gary) Leitner, daughter Nicole; Marcia Medina, son Matthew Hochleutner; son-in-law Clark Stojan, daughters Rachel (Derek) Duffy & Martha (Clinton) Merritt; Thomas Medina, daughter Amber & sons Brandyn and Nathaniel; William (Joanne) Medina, sons Noah (Monica), Daniel & Tomas; Margo (William) Block, son Scott & daughter Sarah; Michael Medina (Lynee Alves), son Jackson & daughter Meredith; and Kaye Medina-Meyer (Steve Meyer) daughters Blythe & Lilith, son Alec, and eight great-grandchildren. June is also survived by Bernard’s siblings Virginia Tharp, Mary Thies, Eugene “Bud” (Judi) Medina and Darlene Maalo; brother-in-law Edward Radloff; and several nieces and nephews. She was preceded in death by husband, Bernard; daughter, Patti Stojan; parents Ernest and Augusta Lorenz; sister Gladys Schmitz; brothers, Theodore and Frederick Lorenz; Bernard’s parents, Tiburcio and Ramona Medina; sisters-in-law, Pauline Nygaard and Marguerite Radloff; brothers-in-law Harry Tharp, Paul Nygaard, Walter Thies, Kurt Maalo and John Schmitz; niece, Diane Mayes; and nephews, Wallace Medina, Daniel Schmitz, John Schmitz, Chris Nygaard and Steve Simon. A memorial gathering will be held for June on Sunday, December 30, 2018 at St. John’s Lutheran Church, 115 N. Spring St., Elgin, Illinois from 2 – 4 PM in the all-purpose room. Memorials may be directed to the Elgin Community College School of Nursing in June's name.

The family of June C. Medina created this Life Tributes page to make it easy to share your memories.

Send flowers to the Medina family.