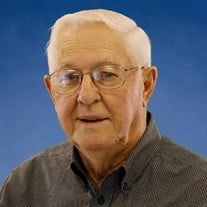 Ken Bartels, age 87, of Plato Center, IL passed away unexpectedly at Northwest Medicine Huntley Hospital on Thursday, June 11th, and into the loving arms of His Savior, Jesus Christ. He was born in Elgin, Illinois on January 10, 1933, the only child of Emil and Meta (Oltendorf) Bartels. He grew up on the family farm in Roselle. Ken was blessed to farm alongside his loving father for many years. During his high school years, Ken enjoyed showing sheep and steers and being involved in the FFA at Elgin High School. On April 18, 1953, Ken married his high school sweetheart Carol Hinch in Elgin, IL. That October he was drafted into the US Army to serve in Korea. His daughter Cindy was born while he was overseas, and he did not meet her until she was 18 months old. Ken and Carol moved to the Plato Center farm in 1964, and Ken continued to farm there until his passing. Ken treasured time with family and friends. Golfing, polka music, and dining on German food were some of his favorites. Ken was a devoted member of St. Peter’s Lutheran Church, North Plato, where he held many leadership roles through the years and loved singing in the choir. He cherished his church family. He was also a proud member of the American Legion Post 57 in Elgin, as well as serving on the Plato Twp. Board for many years. Ken is survived by his daughters, Cindy Kuschel of Elgin, and Pam (David) Neisendorf of Burlington; as well as grandchildren, Matt (Kelly) Kuschel, Becky Kuschel, Amber (Andrew) Nolan and Adam (fiancé Amber Mallon) Neisendorf. Ken had four great-granddaughters, Emma and Kenna Kuschel, and Grace and Ava Nolan. Also surviving are a sister-in-law, Sandy (Don) Dorwaldt of Hampshire, his dear friend and companion, Dolores Schuring of Plato Center, as well as several nieces and nephews. He is preceded in death by his loving wife Carol, and his parents. Ken said many times that he had been blessed with a wonderful life. He was a devout Christian man who always had a warm smile that welcomed genuine conversation with friends new and old. Please know that Ken treasured your friendship and love in his life. The family is planning on hosting a celebration of Ken’s life when current restrictions are lifted. At this time however, his funeral service and burial will be private. Memorials in his name can be made to St. Peter’s Lutheran Church North Plato, or to the Kane County Farm Bureau Scholarship Fund to provide financial help for those students pursuing degrees in agriculture.

Ken Bartels, age 87, of Plato Center, IL passed away unexpectedly at Northwest Medicine Huntley Hospital on Thursday, June 11th, and into the loving arms of His Savior, Jesus Christ. He was born in Elgin, Illinois on January 10, 1933, the... View Obituary & Service Information

The family of Kenneth H. Bartels created this Life Tributes page to make it easy to share your memories.

Send flowers to the Bartels family.