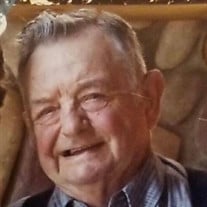 Laverne William “Bill” Cleveland, 85, of Hampshire passed away peacefully Tuesday morning, April 3, 2018 in his home. He was born December 16, 1932 in Spring Valley, MN the son of Harold and Loretta (Deters) Cleveland. He was a member of the 1951 Class of Hampshire High School and served in the U.S. Army from 1953 to 1955. Bill married Carol Seyller on March 3, 1962 and they have resided in New Lebanon since 1963. Bill lived most of his life in the Hampshire-Genoa area and worked as a tool and die maker at Automotive Electric in Genoa, Hampshire Specialty and retired in 1997 from Union Special in Huntley. Bill was a member of St. Catherine of Genoa Catholic Church and the Genoa American Legion. He very much enjoyed fishing and camping with family and friends and spending quality time with his grandchildren and great grandchildren. Surviving are his wife of 56 years, Carol; three children, Kris (Terry Schmidt) Cleveland of Tomah, WI, William (Jenny) of Kingston, David (Becky) of Genoa; 8 grandchildren, Allie & Jack Adams, Tanner (Lauryn), Rhealene (Andrew) Brenton & Gage Cleveland, Copper & Libby Cleveland; great grandson, Noland; and great granddaughter, Marley Cleveland; sister in law, Janice (Ron) White; brother in law, Bob Miller; brother in law, Jim (Mary) Seyller; and many nieces and nephews. He was preceded in death by his parents; sisters, Pat Edmondson, and Marie Kovacevich; brother, Robert Cleveland; and sister in law, Charlene Miller. Mass of Christian Burial will be at 10:30am Saturday, April 7 at St. Catherine of Genoa Catholic Church, 340 S. Stott St., Genoa with burial in the St. Catherine Cemetery. Visitation will be from 3 to 8pm Friday at Fredrick Funeral Home, 284 Park St. Hampshire and continues on Saturday at the church from 9:30 to 10:30am. In lieu of flowers, memorials contributions in his name may be directed to the Bill Cleveland Memorial (for Bill’s favorite charities) c/o Fredrick FH, PO Box 445, Hampshire, Il 60140.

Laverne William &#8220;Bill&#8221; Cleveland, 85, of Hampshire passed away peacefully Tuesday morning, April 3, 2018 in his home. He was born December 16, 1932 in Spring Valley, MN the son of Harold and Loretta (Deters) Cleveland. He was a member... View Obituary & Service Information

The family of Laverne William Cleveland created this Life Tributes page to make it easy to share your memories.

Send flowers to the Cleveland family.