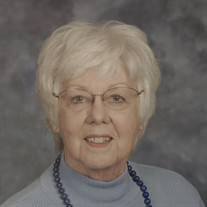 Lenna L. Knaus, 90, of Hampshire, passed away Monday evening, Jan. 25, 2021, with her family at her side. She was born Dec. 31, 1930, in Elgin the daughter of Ernest and Wardrita (Doty) Gustafson. Lenna was a direct descendant of Edward Doty, a passenger on the Mayflower. Lenna was born and raised in Hampshire and was a member of the 1948 Class of Hampshire High School. She was a bookkeeper at her father’s Mobile fuel business until she met the love of her life, Fred G. Knaus of Chicago, and they were married Sept. 20, 1952, at the St. Charles Borromeo Catholic Church in Hampshire. Along with being a dedicated mother, Lenna was kind, gracious, and stylish, yet had grit. She had a great sense of humor and was a good listener who gave sound advice. Lenna enjoyed spending her summers in the Northwoods of Wisconsin with friends and family. She was a great supporter of all her grandchildren’s sporting and musical events. She was blessed to know her 4 great-grandchildren and played a role in their daily lives. She will be truly missed by her family and everyone who was fortunate to have known her. Surviving are her three children, Heidi (Stan) Walker of Hampshire, Erick (Timothy Fenelon) Knaus of Rockford, and Carl (Maricel) Knaus of Fort Collins, CO; seven grandchildren, Amanda (Andrew) Jones, Quinn Walker, Kendall Walker, Jessy (Noah) Metzger, Jack, George, and Gabriel Knaus; four great-grandchildren, Adeline, Katherine, David, and Joanne Jones. She is preceded in death by her parents; her husband, Fred on Oct. 22, 2003; siblings, Virginia Werthwein, Ernadine Tegtman, and Les Gustafson. Mass of Christian Burial will be celebrated at 12 Noon on Saturday, Jan. 30 at the St. Charles Borromeo Catholic Church 297 E. Jefferson Ave., Hampshire. Burial will follow in the Hampshire Center Cemetery. Visitation will be prior to Mass at the church from 10:30 to 11:45. In lieu of flowers, memorial contributions in Lenna’s name should be directed to the Hampshire-Burlington Food Pantry or the American Red Cross.

Lenna L. Knaus, 90, of Hampshire, passed away Monday evening, Jan. 25, 2021, with her family at her side. She was born Dec. 31, 1930, in Elgin the daughter of Ernest and Wardrita (Doty) Gustafson. Lenna was a direct descendant of Edward Doty,... View Obituary & Service Information

The family of Lenna L. Knaus created this Life Tributes page to make it easy to share your memories.

Send flowers to the Knaus family.