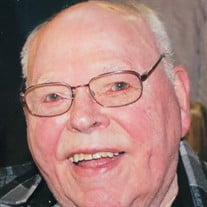 Lloyd Phillip Seyller, 92, of Genoa, died peacefully in his home surrounded by his family on March 19, 2018. He was born on February 10, 1926 to Henry and Marie Seyller in Hampshire. He is survived by the love of his life, Doris J. Pell, whom he married on July 1, 1948; his children, Rodney (Mary) Seyller, Paris, TN, Gary (Karen) Seyller, Springville, TN, Todd (Lin) Seyller, Belvidere, Dale (Susan) Seyller, Poplar Grove, Leann (Gregg) Dunlap, Kingston, Linda (Andrew) Dolder, Shabbona, Paul Seyller, Belvidere; and numerous grandchildren, and great grandchildren who adored him. He most recently lost a son, Jeffrey to a courageous battle of cancer. He was preceded in death by his parents; grandson, Jacob; siblings, Marvlyn, Vernon, Floyd, Lorena, Viola, and Florence. Lloyd graduated from Hampshire High School in 1944. During his lifetime he was employed by Ace Hardware in Hampshire and had his own business during that time called Seyller’s TV and Radio Repair, a custodian at St. Charles Borromeo School and church, Greenlee Tool in Genoa, and Country’s Delight in Hampshire until his retirement in 1991. During his retirement he tinkered on projects and woodwork and he volunteered for the Senior Citizen transportation van as a driver for several years. He loved his music and playing the guitar where he was the lead singer in the band “Elmer’s Tunes”. He also played in the Chet Roush band at one time. Most recently he was found to be plying the guitar and singing in his room at DeKalb County Nursing Center where he was a short-term resident. He enjoyed working on his antique cars which he owned several over the years and driving them in the area parades honking the “ah-ooga” horn. He loved his family and thoroughly enjoyed family gatherings being surrounded by his children and many grandchildren. In his younger years, you could see them all playing softball in their backyard or volleyball or horseshoes (which he loved and played on a team for many years). He was an active member of St. Charles Borromeo Church in Hampshire his entire life until his recent move in 2017 where he became a member of St. Catherine of Genoa. Mass of Christian Burial will be at 11am Monday, March 26 at St Charles Borromeo Catholic Church, 297 E. Jefferson Ave. in Hampshire. Burial will follow in the St. Charles Borromeo Cemetery. Visitation will be on Sunday, March 25 from 2-5pm at Fredrick Funeral Home, 284 Park St. in Hampshire with rosary at 1:30pm. In lieu of flowers, memorial contributions may be directed to the Lloyd Seyller Memorial Fund, c/o Fredrick F.H, P.O. Box 445, Hampshire, IL 60140.

Lloyd Phillip Seyller, 92, of Genoa, died peacefully in his home surrounded by his family on March 19, 2018. He was born on February 10, 1926 to Henry and Marie Seyller in Hampshire. He is survived by the love of his life, Doris J. Pell, whom... View Obituary & Service Information

The family of Lloyd Phillip Seyller created this Life Tributes page to make it easy to share your memories.

Lloyd Phillip Seyller, 92, of Genoa, died peacefully in his home...

Send flowers to the Seyller family.