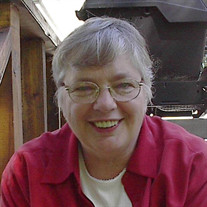 Lois “Arlene” Connors, 76, of Hampshire passed away Monday, January 28,2019 at Advocate Sherman Hospital in Elgin. She was born March 27, 1942 in West Newton, PA the daughter of Wilmer and Ella Marie (Schmuck) Shuster. Arlene married her high school sweetheart, John F. Connors Jr. on June 10, 1961 in Scottdale, PA. They spent their first two years of marriage at Otis Air Force Base in MA and also lived in Hayward, CA and Elgin, IL. They have been Hampshire residents since 1977 and she was employed as an office manager of Northern FS. Arlene was a volunteer paramedic for the Hampshire Fire Department for 5 years and was a member of the Hampshire American Legion Auxiliary. Arlene was a supportive and loving mother and grandmother. She was the original Uber, driving her grandsons to every event and was the ultimate cheerleader. All who knew her were blessed with her genuine kindness, positive outlook, and indomitable strength. She is survived by her husband, John; children, Janet (the late Jim) Kuttnauer, Judith Connors, John F. Connors III; grandsons, Trevor Connors and Michael Gibas; sister, Nancy (Edward) McNally; two nieces and two nephews; and her dog, Ellie. She was preceded in death by her parents; and a grandson, Michael Robert Thompson. A Memorial Service to celebrate her life will be held at 12 noon on Saturday, May 18, 2019 at Fredrick Funeral Home, 284 Park St., Hampshire with burial of Ashes in Hampshire Center Cemetery. Visitation will be prior to services from 10 am to 12 noon at the funeral home. In lieu of flowers, memorial contributions in her name may be directed to Susan G. Komen for the cure at https://ww5.komen.org

The family of Lois "Arlene" Connors created this Life Tributes page to make it easy to share your memories.

Send flowers to the Connors family.