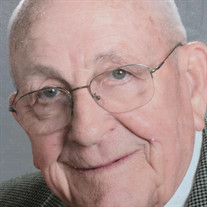 Lowell “Whitey” Reiser, 87, of Hampshire passed away peacefully Monday morning, Aug. 6, 2018, at his home. He was born March 6, 1931, in Burlington the son of Edward and Lorena (Seyller) Reiser. He was a 1949 graduate of Hampshire High School. Whitey married Arlene Engel on Feb. 9, 1952, at St. Charles Borromeo Church in Hampshire. He served in the U.S. Army during the Korean Conflict and was a life member and past Commander of Hampshire Veterans of Foreign Wars Post #8043 and a member of the American Legion Post #57 of Elgin. He was also a member of the Burlington/Hampshire Senior Citizens, Hampshire Historical Society, Fox Valley Model T Club, Northern Illinois Steam Power Club, and a lifelong and active member of St. Charles Borromeo Catholic Church. Whitey was honored by the City of Elgin in May 2015 as a Veteran of the Month for community service and in 2013 Whitey and Arlene received the Earl Engel Award for community service in Hampshire Township. He retired from Masonite Corp. (International Paper Co.). Surviving are his wife, Arlene; daughter and son-in-law, Darlene and Dale Lichthardt of Genoa; son and daughter-in-law, Daryl and Helen Reiser of Clinton, IL; grandchildren, Amy and Joseph Dobzynski of California, Daniel and Ashley Lichthardt of Sycamore, Randy Reiser of Clinton; and step-grandson, John Burton of Clinton; great-granddaughters, Eileen Dobzynski, Grace and Sophia Lichthardt; sisters, Leila Deihs, Rita Kiefer, Joan (Henry) Thies, and Jean Schendel. He was preceded in death by his parents; grandson, Jason Lichthardt; brother, Floyd Reiser; and brothers-in-law, Norman Deihs, Gayland Schendel, and Morris Kiefer. The Mass of Christian Burial will be celebrated at 11 am Saturday, Aug. 11 at the St. Charles Borromeo Catholic Church, 297 E. Jefferson Ave., Hampshire. Burial with Military Honors will follow in the St. Charles Borromeo Cemetery. Visitation will be on Friday at the church from 4 to 8 pm with rosary at 3:45 pm, and closing prayers at 7:45. In lieu of flowers, memorial contributions in his name may be directed to the St. Charles Borromeo Church or School, or to the proposed Hampshire Veterans Park.

The family of Lowell Lee Reiser created this Life Tributes page to make it easy to share your memories.

Send flowers to the Reiser family.