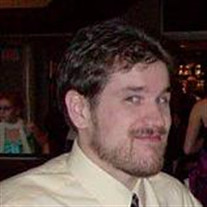 Lucas C. Haberstich, 39, of Albuquerque, NM formerly of Hampshire and Gladstone, Mich. passed away unexpectedly from natural causes as a result of hereditary condition called Alpha-1 antitrypsin deficiency on Sunday, February 16, 2020, in his home in Albuquerque. He was born March 3, 1980 in Escanaba, MI the son of Eric Haberstich and Patricia (Patti) Schmitendorf. Lucas grew up in Gladstone, MI and was a 2002 graduate of Carthage College in Kenosha, WI. He had lived in Chicago for a couple of years then in Tucson, AZ with friends. He moved back to Hampshire with his mom and then Rapid River, MI with his dad. He had only moved to Albuquerque in Dec. of 2019 before his sudden passing. Lucas was an avid comic book reader, collector, and developer. He performed in Improv Theater and loved to make people laugh. He also was a gifted singer, and shared his voice onstage. Surviving is his mother, Patti Schmitendorf; siblings, Rachel (Andrew) Benson, Gwen (Jason) Christianson, and Adam (Corinne) Haberstich; nieces and nephews, Zachary, Gabriel, Aurora, Geneva, Simeon, Ezekiel, Aiden, Paige, Oliver, and Ava; many cousins, extended family and lifelong friends. He is preceded in death by his dad in 2017. Memorial Services will be held at 11 AM, Friday, March 6, at Shepherd of the Prairie Lutheran Church, 10805 E. Main St., Huntley. Memorial visitation will be on Thursday, March 5 from 4 to 7 Pm at the Fredrick Funeral Home, 284 Park St., Hampshire. Private burial will be held in the Hampshire Center Cemetery at a later date. In lieu of flowers, memorial contributions in Lucas’s name may be directed to the Alpha-1 Foundation at www.alpha1.org

The family of Lucas C. Haberstich created this Life Tributes page to make it easy to share your memories.

Send flowers to the Haberstich family.