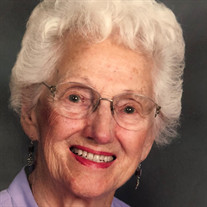 MARCELLA LOUISE (WRIGHT) SPEARS, 99 years and 7 months, of Marengo, passed away peacefully, on April 5, 2019, in Woodstock, accompanied by her loving family. Marcella was born August 13, 1919, in Marengo Township to C. Perry Wright and Helen Louise (Crissey) Wright. She graduated from Marengo Community High School in 1937 and married Richie Russell Spears in 1938. Marcella was a wonderful cook and baker and spent countless hours teaching and caring for her five children. She frequently read to her children in the evenings, impressing on them the value of education. Her descendant’s and their spouses eventually earned over 50 college degrees. She was also very active in the Marengo First Baptist Church where her family had been members for seven generations. Marcella served as church secretary, was a leader in the American Baptist Women's group and for many years organized the church's annual May Breakfast fundraising event. She was strong in her faith in Christ Jesus. Marcella enjoyed touring, hiking in the woods, bowling and golfing. She was a very caring and loving individual who impressed everyone that knew her. The family would like to thank the staff at Hearthstone Manor Woodstock for the excellent care given to Marcella. Marcella is survived by her sisters Doris L. (Wright) McNeese and Jean L. (Wright) Thornhill. She has over 70 descendant’s and their spouses. She is survived by her children and their spouses, Richard Lee Spears and Nancy Marie (Johnson) Spears, David Lewis Spears, Judith Lynn (Spears) Weiss and William S. Weiss, and Jeffrey Scott Spears and Debora Rae (Laughlin) Spears. She is also survived by her grandchildren, William D. Weiss, David M. Spears, Steven D. Weiss, John H. Spears, Brian D. Spears, Warren O. Spears, Amy L. Weiss, Jennifer C. (Sindermann) Mulligan, Timothy R. Sinderman, Erin M. (Spears) Koroll, Ryan P. Spears, Courtney C. (Spears) Johnson and Caitlin C. (Spears) Durand. In addition, she is survived by 28 great-grandchildren. Marcella was predeceased by her parents, her husband, her sister, Mary R. (Wright) Reh, her daughter, Patricia Louise (Spears) Sindermann, her son-in-law Fredrick L. A. Sindermann, and her granddaughter, Katherine M. (Spears) Artis. Visitation, Saturday, April 13, 2019, from 9 a.m. – 11 a.m. at First Baptist Church Marengo, 320 E. Washington St., with a funeral service to follow at 11 a.m. Following the luncheon, burial for family and close friends will be held at 2:30 at McHenry County Memorial Park, Woodstock. In lieu of flowers, a donation may be made to the First Baptist Church Marengo, Marcella Spears Fund.

The family of Marcella Louise Spears created this Life Tributes page to make it easy to share your memories.

Send flowers to the Spears family.