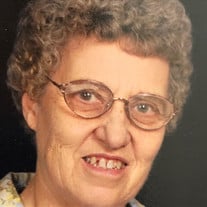 Marianne E. Schirmer, 83, of Marengo, died March 27, 2019, in her home. Born August 18, 1935, in Medford, WI., the 5th daughter and 10th child of Eric and Julia (Olson) Carlson. She attended elementary school in a one-room school in the town of Holway and was baptized, confirmed and married at Our Savior Lutheran Church. She graduated from Medford High School in 1953 and married Irving Schirmer of Rib Lake, on August 4, 1956, who survives her. Together they had five children. Her first three children preceded her in death; infant daughter, Margaret Kirsten; son, Wesley James; and daughter, Julienne Clare. She is survived by her daughter, Carole (JD) Peters; and son, Daniel (Cari) Schirmer; her grandchildren, Joshua (Michael) Peters, Mark (Amanda) Peters, Jess Stieneke, Annie Schirmer and Allison Schirmer; and sister, Lucille Buehler. Marianne was a woman of strong faith, strength, and resilience. She cared deeply for others. After losing her first two children at a very young age, she agreed to take in foster children to fill the void of her significant loss. Later on, she and her husband offered to take in several young men who would reside in their home and learn a trade of working in their automobile radiator shop located on the family farm. Marianne was a 45-year member at St. John’s Lutheran Church in Union, where she enjoyed her bible studies and volunteering her time. She was a member of the LWML, Altar Guild, Choir and for several years led the Teen League. Irving and Marianne enjoyed working together on their 84-acre family farm in Marengo where they had three gardens, raised beagle hounds, dairy goats, chickens, rabbits, horses, and her dachshunds. Being outdoors brought Marianne great joy. She loved grading the driveway, mowing lawns, caring for the property, the animals they raised and teaching her children a strong work ethic. She also enjoyed fishing. Her favorite spot to fish was at the Big Rock on the Jump River in Ogema, Wisconsin. She loved her grandchildren and especially enjoyed coloring Easter eggs on Good Friday. Visitation to be held Sunday, March 31, 2019, from 3:00-7:00 p.m. at St. John’s Lutheran Church, Union and continues Monday, April 1, 2019, in the church from 10 am until the Celebration of Life service at 11 am. In Lieu of flowers memorials to the family for a fund to be determined at a later date. Inurnment will be held later this spring in Medford, Wisconsin

Marianne E. Schirmer, 83, of Marengo, died March 27, 2019, in her home. Born August 18, 1935, in Medford, WI., the 5th daughter and 10th child of Eric and Julia (Olson) Carlson. She attended elementary school in a one-room school in the town... View Obituary & Service Information

The family of Marianne E. Schirmer created this Life Tributes page to make it easy to share your memories.

Send flowers to the Schirmer family.