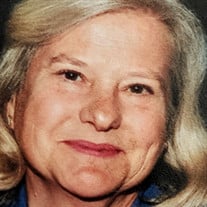 Mary Jo Gannon, 85, of Sycamore, formerly of Burlington passed away early Thursday morning Aug. 16, 2018 at Lincolnshire Place in Sycamore where she made her home. She was born June 15, 1933 in Des Moines, Iowa the daughter of Bernard and Mary (Sarchfield) Howerter. She received a BS Degree in Chemistry from Clarke College in Dubuque, IA. She was the first female chemist to be employed at the Des Moines Waterworks. Mary Jo married John T. “Tom” Gannon on Sept. 8, 1956 at St. John Catholic Church in Des Moines and they farmed in Mingo, Iowa for 5 years. They moved to West Chicago, IL where they resided for 20 years before moving to the mushroom farm in Burlington in 1986. She was a devoted member of the St. Charles Borromeo Catholic Church in Hampshire, Light of the World, and Cursillo. She had also played the organ at St. Mary Catholic Church in West Chicago when they resided there. Surviving are her six children, David (Christine), Erin (Bruce) Oates, Alan (Kristi), Kevin (Peggy), Gary (Trish), Maureen (Joe) Gannon; 19 grandchildren; 1 great-granddaughter; siblings, Judy (Jim) Bisignano, Bernard (Rhonda) Howerter, Susan (Steve) Kappel, Nina (Archie) Humphrey; and many nieces and nephews. She was preceded in death by her parents; her husband, Tom on March 12, 2019; and son, Stephen. Mass of Christian Burial will be celebrated at 10:30 am Monday, Aug. 20 at St. Charles Borromeo Church, 297 E. Jefferson Ave., Hampshire. Burial will follow in the St. Charles Borromeo Cemetery. Visitation will be on Sunday, Aug. 19 at Fredrick Funeral Home, 284 Park St., Hampshire from 2- 5pm with closing prayers at 5pm. In lieu of flowers, memorials may be directed to Alzheimer’s Assoc., Greater Illinois Chapter, 1111 S. Alpine Rd., Ste 307, Rockford, IL 61108.

Mary Jo Gannon, 85, of Sycamore, formerly of Burlington passed away early Thursday morning Aug. 16, 2018 at Lincolnshire Place in Sycamore where she made her home. She was born June 15, 1933 in Des Moines, Iowa the daughter of Bernard and Mary... View Obituary & Service Information

The family of Mary Jo Gannon created this Life Tributes page to make it easy to share your memories.

Send flowers to the Gannon family.