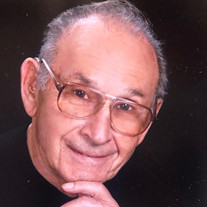 Mike Maretti, 96, of Marengo, died Tuesday, November 19, 2019, at OSF St. Anthony Medical Center. Born January 18, 1923, in Carpentersville, the son of Dominic and Ida (Addimondo) Maretti. Was a US Veteran of the Army/Airforce serving in WWII in England. On April 3, 1948, he married his loving wife of 71 years, Janet Erb and together they raised three beautiful children. Mike was a talented machinist working at various industrial businesses. But his most proud achievement was working in the family fireworks company, Carpentersville Fireworks. They produced the largest variety of aerial shells in the world. He cherished the time he spent with his family and enjoyed fishing, hunting, baseball, golf, and bowling. He was a proud member of the American Legion Post 192, the VFW and the Italian American Club in Marengo. Mike was a kind and caring man with a heart of gold, he will be missed dearly. The family wishes to extend a sincere thank you to the Marengo Rescue Squad, the dedicated members of the American Legion, Marsha Stacy and family for her medical expertise, Tony and Gina Foust for their compassionate care and time they spent with Mike and to Rev. William Antillon for his many visits. Survivors include his wife, Janet; daughters, Teresa Foust (Jack Barnes) and Carol (Neal) Tremethick; daughter-in-law, Marsha (Robert) Stacy and family; son-in-law, Tony Foust; grandchildren, Gina (Jim Yarrington Jr.) Foust, Sean Tremethick, Matthew (Rebecca) Tremethick, Michael D. (Tania) Maretti and Anne Marie Foust; great-grandchildren, James Yarrington III, Michael Tremethick, Dylan Tremethick, Emma Maretti and Lily Maretti. He is preceded in death by his parents, his son, Michael J. Maretti and 10 siblings. Visitation Monday, November 25 from 4-7 p.m. in the Parish Hall of Sacred Heart Catholic Church, 323 N. Taylor Street, Marengo and continues on Tuesday from 9 a.m. until time of prayer at 9:45. Funeral Mass will be held at 10 a.m. Tuesday, November 26 in the church with interment to follow at Sacred Heart Catholic Cemetery. In lieu of flowers memorials to the family for a fund to be established at a later date.

Mike Maretti, 96, of Marengo, died Tuesday, November 19, 2019, at OSF St. Anthony Medical Center. Born January 18, 1923, in Carpentersville, the son of Dominic and Ida (Addimondo) Maretti. Was a US Veteran of the Army/Airforce serving in WWII... View Obituary & Service Information

The family of Mike Maretti created this Life Tributes page to make it easy to share your memories.

Send flowers to the Maretti family.