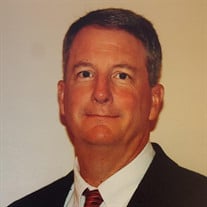 Mike Zumer, 56, of Lincoln, NE and formerly of Chatham, IL passed away unexpectedly Sunday, July 12, 2020, in Lincoln, Nebraska. Born November 1, 1963, in Davenport, IA the son of Don and Mary (Bartmier) Zumer. He graduated from Burlington Central High School in 1981 and Western IL University in 1987. Mike married Jill Getzelman at the Burlington United Methodist Church on July 25, 1986. Mike was a loving husband and father. He was fiercely proud of Clint and Bailey, and was an avid coach during their years of hockey, softball and baseball. He even founded a Women’s Hockey program with his wife, Jill, in Springfield, IL. Prior to playing the role of coach for his children, he was the goalie coach for Lawrence University in Appleton, WI. Mike spent his professional career traveling across the country in the Animal Health industry. Working for North Shore Canine, Fort Dodge Animal Health (Pfizer), Harris Vaccines, Phytobiotics and most recently Neogen. During his time at Fort Dodge Mike received the President’s award for outstanding sales. Mike thoroughly enjoyed all of the clients, friends and co-workers he met along the way. In 2006, he and his friend, Greg, began a business partnership called LOK-N-BLOK. Mike was the Chief Operating Officer for the company. He had been looking forward to revolutionizing the building industry. His personal interests found him on the golf course - walking, of course (since he did not like to use a cart). He held many positions at the hockey rink as a fan, referee, coach, and goalie (with his “special” water bottle). Most recently, Mike found his passion for cooking. He was creative and loved sharing his new recipes with others. When Mike wasn’t on the course, the rink, or at his Traeger smoker, he could be found swinging his wife, Jill, around the dance floor to live country music - occasionally, he would even grab the mic! Survivors include his wife, Jill and their children Clint and Bailey, mother Mary, brother Mark, sister Sue (Phil) Cwik, father-in-law, LeRoy Getzelman. Mike was preceded in death by his father, Don and his mother-in-law, Ruth Getzelman. Visitation will be Sunday, July 19 from 2:00-6:00 pm at Fredrick Funeral Home 284 Park St. Hampshire, IL 60140. Due to COVID 19, social distancing and masks will be required. A private funeral service will be held on Monday. A Memorial Service will be held in Springfield, IL in August/September - date to be determined. In lieu of flowers, we will be collecting donations in Mike's memory to be dispersed among the various youth hockey communities closest to Mike's heart.

The family of Mike Zumer created this Life Tributes page to make it easy to share your memories.

Send flowers to the Zumer family.