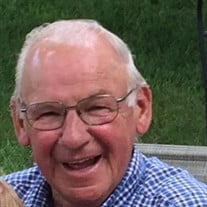 Orlyn A. Anderson “Orly”. 75, of Hampshire, passed away Thursday afternoon, Nov. 29, 2018 at Advocate Sherman Hospital in Elgin. He was born May 5, 1943 in Whitehall Wisc. the son of Roy and Lillian (Franson) Anderson. Orly married Lavina Buchholz on May 11, 1963 in Strum, Wisc. He has been a Hampshire resident since 1960 and they raised their family there. He worked for Country Delight in Hampshire for 23 years and for Shedd’s Dairy in Elgin for several years. In retirement, he enjoyed his work at Buck Bros. in Hampshire. Orly always had a wonderful sense of humor and was a good friend to many. He was a loving husband, father, and grandfather and will be deeply missed by his wife of 55 years, Lavina; sons, Kevin (Sue) and Jamey; 8 grandchildren, Ryan (Morgan), Mic (Malory) Kelsey, Kyle, Chase, Brett (Katie), Jori, and Russell; 3 great-grandchildren, Liam, Penny, and Delany; siblings, Yvonne (the late Ed) Munson, Lorraine (Floyd) Christenson, Donald (the late Sue) Anderson, Kenny Anderson, Charles (Gail) Anderson; many nieces and nephews and countless good friends. He was preceded in death by his parents; two sons, Keith in 1981, and Brian in 2011; two brothers, Rodney, and Dean Anderson. Funeral Services will be held at 11 am Wednesday, Dec. 5 at St. John Lutheran Church, 13N535 French Rd, Burlington with burial following in Hampshire Center Cemetery. Visitation will be from 3 to 7 Tuesday at St. John Lutheran Church and continues on Wed. prior to services from 10 to 11 am. In lieu of flowers, memorial contributions in his name to the Orlyn Anderson Memorial, c/o PO Box 445, Hampshire, IL 60140

The family of Orlyn A. "Orly" Anderson created this Life Tributes page to make it easy to share your memories.

Orlyn A. Anderson “Orly”. 75, of Hampshire, passed away Thursday...

Send flowers to the Anderson family.