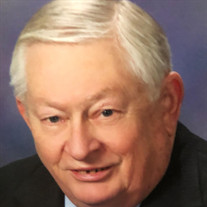 Richard W. “Dick” Eicksteadt, 83, of Marengo, passed away Monday, July 1, 2019 at home with his wife at his side. Born July 31, 1935 in Belvidere, the son of Eric and Mary (Krause) Eicksteadt. He was a 1953 graduate of Marengo Community High School and went on to attend Central Missouri State College while serving in the U.S. Airforce; graduated from the University of Illinois and received his Juris Doctor from Chicago Kent College of Law. Dick married Shirley Ann Hartman on October 30, 1971. After Law school Dick went into partnership with his high school friends, Norman Pollock and Harvey Meyers in their law firm, Pollock, Meyers and Eicksteadt. He loved being a lawyer and was proud of a case he successfully argued before the Illinois Supreme Court, Pyne v. Witmer, which has been cited in hundreds of cases throughout the U.S. Dick was a member of the Marengo Lions Club; Marengo Chamber of Commerce, Marengo Little League; McHenry County Bar Assn; American Bar Assn; Illinois Trial Lawyers Assn; American Trial Lawyers Assn and the American Legion. Besides their love of the Cubs, Dick and Shirley enjoyed traveling with friends to view WWII sites all over Europe; and he was sure to meet up once a month for lunch with his high school classmates. Survivors include his beloved wife and best friend, Shirley; sister, Joan Langan; brothers-in-law, Bill Hartman and Lee (JoAnn) Hartman, sister-in-law, L. Lee Hartman and many nieces, nephews and lifelong friends. He was preceded in death by his parents; brother, James Eicksteadt; father and mother-in-law, Roland (Evelyn) Hartman; brother-in-law, Robert Hartman; and his beloved pets, Buffer, Ryno and Corby. Visitation Thursday, July 11, 2019 from 4:00 – 7:30 p.m. at Zion Lutheran Church, 412 Jackson St. Marengo and continues on Friday, July 12 from 10 a.m. until time of prayer 10:45 a.m. Funeral service to be at 11 a.m. at Zion Lutheran Church. Interment with military honors to follow in Marengo City Cemetery. In lieu of flowers memorials to: Zion Lutheran Church or Marengo Little League.

The family of Richard W. Eicksteadt created this Life Tributes page to make it easy to share your memories.

Send flowers to the Eicksteadt family.