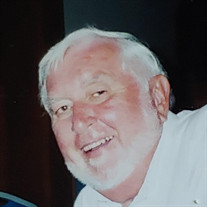 Richard F. “Smiley” Wagner, 83, of Hampshire passed away Tuesday, April 20, 2021, in Elgin. He was born Sept. 22, 1937, in Chicago, the son of Marie Kautz and Michael Wagner. He was raised in Spring Grove by his grandparents and graduated from Richmond High School in 1956, and then attended the University of Wisconsin Whitewater. Smiley married Bonita “Twid” Swanson on Feb. 26, 1965. They operated the Chick-N-Dip in Hampshire for 42 years. Surviving is his wife, Twid; sons, Richard A. Wagner of Elgin, and Bradley J. Wagner of Malta; 4 grandchildren, Brandon Wagner of Malta, Courtney Wagner of Malta, Alyssa Wagner of Malta, and Jocelyn “B” Wagner of Elgin; and a great-grandson, Joseph. He is preceded in death by his parents; a brother, Herb Wagner; and 2 grandchildren, Dylan Wagner, and Nicole Keding. Private Burial of Cremains will be on Monday, April 26 at the Hampshire Center Cemetery. There will be no visitation. Memorial contributions in Smiley’s name should be directed to the Burlington-Hampshire Food Pantry, c/o P.O. Box 651, Hampshire, IL 60140.

The family of Richard F. "Smiley" Wagner created this Life Tributes page to make it easy to share your memories.

Send flowers to the Wagner family.