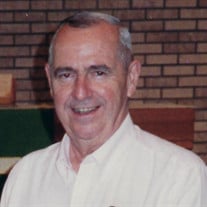 Richard E. Wood, “Woody”, 82, of Plato Center, passed away early Saturday morning, Oct. 26, 2019, at St. Joseph Hospital in Elgin. He was born Dec. 5, 1936, in Elgin the son of Felix and Elma (Nestler) Wood. He was a member of the 1954 Class of Elgin High School. Dick married Lois A. Hennig on April 27, 1957, at St. John Lutheran Church in Elgin. Dick served in the US Navy for 3 years in the late ’50s. He returned to Elgin and began a 46-year career as a machinist for Illinois Tool Works. He was a member of St. Peter’s Lutheran Church in North Plato. Surviving is his wife of 62 years, Lois; daughter, Susan (Steve) Kamp; grandsons, Kory & Drew Kamp; a sister, Cindy (Jim) Romano; and several nieces and nephews. He is preceded in death by his parents; his beloved son, Michael “Mike” in 1980; and two brothers, Merle and Jerry Wood. Funeral Services will be held at 11 am Friday, Nov. 1 at St. Peter’s Lutheran Church, 43W301 Plank Rd., Hampshire. Burial with Military Honors will be held immediately following in the Plato Center Cemetery. Visitation will be prior to services at the church on Friday from 9:30–11 am. In lieu of flowers, memorial contributions in his name may be directed to Anderson Animal Shelter, 1000 S. La Fox St., South Elgin, 60177 or St. Peter's Lutheran Church.

The family of Richard Earl Wood created this Life Tributes page to make it easy to share your memories.

Send flowers to the Wood family.