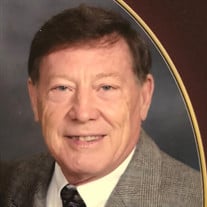 Robert J. Handschiegel, of Hampshire, Illinois, passed away in his home Friday, July 16, 2021. Bob was born in Chicago, Illinois, on May 29, 1940, to his parents Edward C. Handschiegel and Carolyn M. (Troccoli) Handschiegel. Bob graduated from York High School in Elmhurst, Illinois, and thereafter spent a 42-year career with the U.S. Government/Federal Aviation Administration. After meeting over a mutual love of Corvettes, Bob married Marlene (Ruhnau) on May 22, 1965, and they recently celebrated their 56th wedding anniversary. Bob earned his Private Pilot license in 1966 and Marlene 10 years later, with their love of flying bringing them to Casa de Aero in Hampshire where they spent the last 44 years. Anybody who knows Bob knows how much he enjoyed his cars, particularly his Corvettes, their 1941 Lincoln Continental, and of course his airplane. He had an endless wealth of information, which he was always glad to share! Bob and Marlene enjoyed traveling in their RV and wintering in Florida. Bob is survived by his wife, Marlene; his daughters, Marilyn (Dean Black) and, Lyndsey (her partner Robert Hettinger); and many beloved cousins and relatives. Mass of Christian Burial will be held at 10:30 AM on Thursday, July 22 at Saint Charles Borromeo Catholic Church, 297 E. Jefferson Avenue, Hampshire, Illinois. Visitation will be prior to mass from 9:00 am – 10:15 am. Private burial will be at Mount Carmel, Hillside, Illinois. In lieu of flowers, donations in his memory may be made to Saint Charles Borromeo Catholic Church and School.

The family of Robert J., Handschiegel created this Life Tributes page to make it easy to share your memories.

Robert J. Handschiegel, of Hampshire, Illinois, passed away in...

Send flowers to the Handschiegel family.