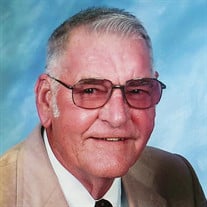 Robert D. “Bob” Peterson, 88, of Hampshire, formerly of South Elgin, passed away Tuesday afternoon, Feb. 22, 2022, in his home. He was born March 20, 1933, in Hampshire the son of Victor and Arvilla (Awe) Peterson. He was a member of the 1951 Class of Hampshire High School and then served in the U.S. Army during the Korean War. Bob married Mary Ann Albert on Nov. 12, 1955, at the First United Methodist Church in Elgin and they raised their family in South Elgin before moving to Hampshire in 2001. Bob was a longtime bricklayer in the area. He had been a member of the Zion United Methodist Church in Hampshire, a lifetime member of Hampshire VFW Post 8043, the Elgin Moose, and the South Elgin Lions Club. Surviving is his son, Dale (Cindy) Peterson of Algonquin; three grandchildren, Nikki, Alyssa, Hayden; a sister, Leola Widmayer; nephew, Alan (Missy) Widmayer both of Hampshire ; nieces, Meta (Pat) McQueary of Idaho, and Camille Rea of Elgin; and great-niece and nephew, Matt and Haley Widmayer. He is preceded in death by his parents; his wife, Mary Ann on June 28, 2014; a son, Scott Peterson; brother-in-law, David Widmayer; and nephew, Warren Widmayer. Following cremation, a graveside service will be held at 2 PM Saturday, April 16, 2022, at the Hampshire Center Cemetery. Please join us for Drinks and Hors Dourves at Niko’s 72 & 47 from 3-5 pm Memorial contributions should be directed to the Zion United Methodist Church, 157 W. Jefferson Ave. Hampshire, IL 60140.

The family of Robert D. "Bob" Peterson created this Life Tributes page to make it easy to share your memories.

Send flowers to the Peterson family.