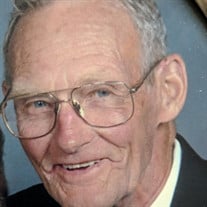 Robert L. Proffitt, 89, of Hampshire passed away Sunday night, April 8, 2018 in his home with his family at his side. He was born July 3, 1928 in Lewistown, IL to Huston and Edith (Pierce) Proffitt. Bob married Marjorie Olinger on Nov. 26, 1947 at St. Mary’s Catholic Church in Elgin. He was owner/operator of R.L. Proffitt Hide and Trucking Co. He started his business with one truck in Elgin in 1950. He moved to Hampshire in 1955 where he converted a barn into warehouse use and operations space. In 1959 he built a cement block building and had additions added over the years as he modernized to speed up the curing process from two weeks to 48 hours. One portion of the building were used for maintenance and service of the four semi transports which ran regularly to hide tanneries in N.Y., PA, and MA and to export points where boats take Hampshire area hides to Germany, Spain, and England. Besides the semi transports, he had three smaller trucks which ran locally. Bob had 11 employees to keep operations including his sons, Bob Jr., Dick, Ron, and his daughter Rose handled the office work. After his retirement, he enjoyed bowling and golfing. He was a volunteer at St. Charles Borromeo Church for many years. Bob loved doing handyman projects with his children and grandchildren. He is survived by his wife of 70 years, Marjorie; 9 children, Linda Altepeter, Bob (Kathy), Dick (Donna), Rose (Bill) Homuth, Ronald (Peggy), Roger (Patty), John, Sissy Broughton, and Margaret Pace; 23 grandchildren; 30 great grandchildren; and 5 great-great grandchildren. He was preceded in death by his parents; brothers, Wayne, and David; 3 grandchildren; 2 great grandchildren; niece, Mary Alice Botteron Martin; nephew, Norm Botteron; and his son in laws, Russ Broughton, and Jim Altepeter. The Mass of Christian Burial will be celebrated on Monday, April 16 at 11am at St. Charles Borromeo Catholic Church, 297 E. Jefferson Ave., Hampshire. Burial will follow in the St. Charles Borromeo Cemetery. Visitation will be prior to mass at the church from 9:30-11am. In lieu of flowers, masses in his name may be directed to St. Charles Borromeo Church.

Robert L. Proffitt, 89, of Hampshire passed away Sunday night, April 8, 2018 in his home with his family at his side. He was born July 3, 1928 in Lewistown, IL to Huston and Edith (Pierce) Proffitt. Bob married Marjorie Olinger on Nov. 26, 1947... View Obituary & Service Information

The family of Robert L. Proffitt created this Life Tributes page to make it easy to share your memories.

Send flowers to the Proffitt family.