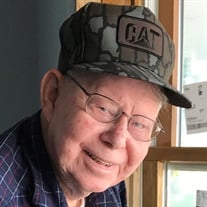 Robert G. “Bob” Shatters, 95 of Hampshire passed away early Sunday morning, June 10, 2018 in Sycamore. He was born Dec. 23, 1922 in Hampshire the son of George and Ida (Landwehr) Shatters. Bob married Jeanette A. Wagner on January 25, 1947 at the Trinity Lutheran Church in Elgin. Bob was a farmer and they lived and worked at several farms in the Hampshire area before moving into town. He also worked at Playskool Mfg. in Hampshire and at River Valley Memorial Gardens in Dundee. They retired to Green Lake, WI later moved to Davis Junction and eventually returned to the Hampshire area. He was a devoted husband, father, and grandfather who will be deeply missed by his children, Terri Shatters-Hahn, Dale (Jeannie), Tom, Mary (Duane) Schmitt, Robert Jr. (Marcie), and Karen (Doug) Stuehler; 18 grandchildren; 23 great-grandchildren; two nieces; and two nephews, including a special nephew, Edward “Buzz” Getzelman. He was preceded in death by his parents; wife, Jeanette on June 14, 2017; and a brother, Donald “Fuzz” Shatters. Funeral Services will be held at 10:30 am Friday, June 15 at Fredrick Funeral Home, 284 Park St. in Hampshire with burial following in Hampshire Center Cemetery. Visitation will be on Thursday from 4 to 8 pm and continue Friday prior to services from 9:30 to 10:30 am. In lieu of flowers, memorial contributions in his name may be directed to Ella Johnson Memorial Library, 109 South State St, Hampshire, IL 60140.

The family of Robert G. Shatters created this Life Tributes page to make it easy to share your memories.

Send flowers to the Shatters family.