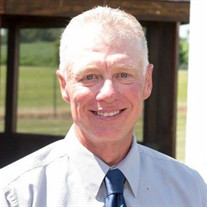 Ronald L. Kusk, 59, of Hampshire passed away Feb. 20, 2020, surrounded by the love and prayers of his family at Central DuPage Hospital in Winfield. He was born May 7, 1960, in St. Charles the son of Donald and Marcia (Rissman) Kusk. Ron grew up on the family farm with his brother Rick and helped out on the farm. Ron attended local schools and was a 1978 graduate of Burlington Central High School. On Nov. 2, 1985, he married Betty Fulbright and together they began their life together. In 1989 Ron (Kusk Construction) built their family home that was a labor of love. He spent his life building quality custom homes. There was no house or job to difficult for Ron. He was an avid sports fan, especially softball that he played over 40 years. Ron enjoyed participating in car shows with his classic car and took home many trophies and plaques. After a day’s work, Ron enjoyed coming home and doing yard work that he always took pride in. Working right alongside of him was his faithful canine friend, Bella! German Shepherds always had a special bond with Ron. In Sept. 2018, Ron put his tools down after being diagnosed with brain cancer. His home workshop was his castle. His hands were rarely idle. Ron touched the lives of so many through his work. No matter how you met him, you were sure to never forget his smile. His family was his pride and joy! They kept him going, even when the going got tough. He is survived by his wife, Betty; his daughter, Nicole (Travis) Schultz, and their children, Madalyn, Tyler, & Macey; Brianna (Danny) Imse, and their children, Braedyn & Bentley, and a granddaughter due in June; son, Ryan (Natalie) Kusk, and their child, Kennedy; mother, Marcia (Bill) Mikesell; brother, Rick Kusk; stepmother, Judy Kusk; mother-in-law, Marlene Fulbright; step-sisters, Becky (Kent) Foster, Jenny (Paul) Wilcox; and step-brother, Bill Marshall. He is preceded in death by his father, Donald Kusk; and father-in-law, Ray Fulbright. Funeral Service will be at 1 PM on Tues., Feb. 25, at St. Peter’s Lutheran Church, 43W301 Plank Rd., rural Hampshire. Cremation will follow services with burial in the North Plato Cemetery at a later date. Visitation will be at the church on Monday, Feb. 24 from 4-8 PM. Memorial Contributions in Ron's name may be directed to the Hampshire Park District Foundation, P.O. Box 953, Hampshire, IL 60140 (to purchase a park bench with his name to be placed by the field he played softball).

Ronald L. Kusk, 59, of Hampshire passed away Feb. 20, 2020, surrounded by the love and prayers of his family at Central DuPage Hospital in Winfield. He was born May 7, 1960, in St. Charles the son of Donald and Marcia (Rissman) Kusk. Ron grew... View Obituary & Service Information

The family of Ronald L. Kusk created this Life Tributes page to make it easy to share your memories.

Send flowers to the Kusk family.