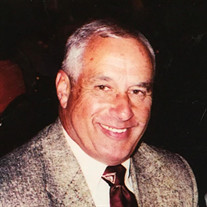 Theodore Douglas Irving passed away on Friday, November 20th, 2020. Doug was born to Ted and Evelyn Irving, the oldest of three boys. By all accounts, he was a hardworking and responsible kid, protective of his brothers and someone you didn't want to mess with. Many stories have circulated throughout the years about neighborhood bullies who might have received a beatdown or two from Doug . An athletic teenager, he graduated from Hampshire High School in 1960 and attended college for a few semesters where he taught himself how to play the guitar. He opted to leave school for a job, and shortly thereafter enrolled in the National Guard. He later met Margaret Bevan at a local hospital where she worked as a nurse and he was a patient. Margaret is fond of relaying how he refused any pain medications in an attempt to show off and he made her drop a tray of pills. His hospital roommate bet him that he wouldn't be able to get her to go out on a date with him, and the rest is history. They were married on November 19th,1966, and had their 54th wedding anniversary the day before he passed. Doug was a natural and gifted leader who was well respected in the community. Very civic minded, he spent decades serving on the D300 school board (serving as President for many terms) as well as a trustee of the Hampshire village and fire boards. Though not a big man, Doug had an air about him that commanded respect. Mostly stoic, and not a man of many words, people listened to what he had to say. He was an intelligent and fair man who did not suffer fools well. When one of his daughters jokingly asked him what he would do if she brought home a boyfriend with an earring, his response was "I'd see how far I could throw him" (please note this was back in the 80's, much has changed!). Those who knew Doug well knew that he was someone who marched to the beat of his own drum and had a great sense of humor (unless you ask his wife about the humor, she may disagree...). He was known to entertain his three daughters when they were young by pretending to be Gizmo from The Gremlins when driving them in the car. An involved and loving dad, who might have been a touch short on patience (pretty sure all three girls inherited that trait), his patience was abound when dings, dents and scratches would mysteriously appear on his car and no one knew how they got there. . He was also a loving and doting grandfather who enjoyed watching his grandchildren grow and their personalities develop. He was usually always in the stands at basketball games, cheering them on as one of their biggest fans. Doug was a man of many talents and good at almost everything he did. He was extremely creative and very good with his hands. He could also fix just about anything, you just had to be okay with the flurry of curse words that would inevitably accompany the work. He was always willing to help his daughters and wife with whatever they needed (as long as you didn't ask too many questions). He was an avid golfer as well and loved music, which was a beautiful gift he shared with his family for years. It was common to have Doug playing the likes of Gordon Lightfoot, Kingston Trio, etc. and making up songs about his children. He played and sang incredibly well even though he never really learned to read music. It is quite difficult to sum up such an incredible man. He is so much more than a sum of all these parts. He wasn't one to share his feelings readily, but he would often put them in eloquent letters or photo scrapbooks to share with his family. An interesting and great embellisher, his stories about being part of the CIA and other tall tales entertained us all for years. An introvert and deep thinker, his heart was not known to all, but those of us who had the honor to share it know what a privilege that was. His uniqueness, his comfort, his stories and music will be dearly missed. Doug was preceded in death by his parents, Ted and Evelyn Irving, youngest brother, Bob Irving and his eldest daughter, Jennifer (Charlie) Irving-Frazier. Still here grieving, celebrating and honoring him are his wife of 54 years (and amazing caregiver to him the last several years), Margaret (Bevan) Irving; his very caring and supportive brother, Dick (Kay) Irving; his daughters, Dianne (Trevor) Herrmann, and Kristi Irving; son-in-law, Charlie Frazier; and his grandchildren, Lauren and Ryan Herrmann. Due to the pandemic, services will be private and arranged by Frederick Funeral Home in Hampshire, IL. In lieu of flowers, those who are interested are welcome to make a donation in his name to the Hampshire Fire Protection District, PO Box 245, Hampshire, IL 60140.

Theodore Douglas Irving passed away on Friday, November 20th, 2020. Doug was born to Ted and Evelyn Irving, the oldest of three boys. By all accounts, he was a hardworking and responsible kid, protective of his brothers and someone you didn't... View Obituary & Service Information

The family of Theodore Douglas Irving created this Life Tributes page to make it easy to share your memories.

Send flowers to the Irving family.