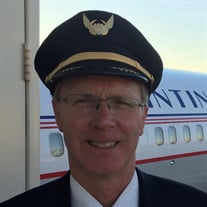 Timothy A. Shepley, 57, of Sycamore, passed away Sunday evening on Dec. 6, 2020, in Barrington, IL with his family at his side. Capt. Shepley was born Dec. 20, 1962, in Millersburg, PA. Tim graduated from Shippensburg University and completed his master’s degree at Embry-Riddle Aeronautical University. Following graduation, Tim rode his bike across America from Delaware to San Diego. With pride and honor, Tim served in the U.S.A.F. during the Gulf War flying and instructing on the T-37, T-38 and KC-10 aircraft. Following his military service, Tim began a 25-year flying career with United Airlines. He held the positions of Flight Engineer on the DC-10 and First Officer on the 737 and 757/767 aircraft. He rose to the position of Captain on the Airbus A319/A320 and the Boeing 737 aircraft. He had a passion for flying, teaching as well as bicycling. His memory will forever be treasured by his loving wife, Beth (Bowers) whom he married January 8, 1994 in Shreveport, LA; children, Andrew, Abigail, and Maggie; mother, Mildred Shepley; brothers, Vince (Evy) Shepley, Jim (Amy) Shepley; mother-in-law, Betty Bowers, brothers-in-law, Brian (Holly) Bowers, Blaine (Barbara) Bowers; and sister-in-law, Bonny (Brod) Bourque. He is preceded in death by his father; brother-in-law, William Bowers; and father-in-law, William A. Bowers. Visitation for Tim will be from 4 to 5:30 PM Wednesday, Dec. 16 at St. Charles Borromeo Catholic Church, 297 E. Jefferson Ave., Hampshire, IL. Due to COVID-19 masks and social distancing will be required. A prayer service will follow at 5:30. Mr. Shepley’s Funeral Mass will be held in Andersonville, Georgia with burial in Andersonville National Cemetery. Any donations that are made, we'd like to collect, organize and donate to flight training scholarships in Tim's name for the future, please send c/o Timothy Shepley Scholarship Fund to Fredrick Funeral Home, PO Box 445, Hampshire, IL 60140

Timothy A. Shepley, 57, of Sycamore, passed away Sunday evening on Dec. 6, 2020, in Barrington, IL with his family at his side. Capt. Shepley was born Dec. 20, 1962, in Millersburg, PA. Tim graduated from Shippensburg University and completed... View Obituary & Service Information

The family of Timothy A. Shepley created this Life Tributes page to make it easy to share your memories.

Timothy A. Shepley, 57, of Sycamore, passed away Sunday evening...

Send flowers to the Shepley family.