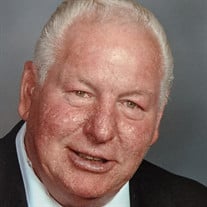 William J. “Bill” Wilk Jr., 84, of Hampshire, formerly of Carpentersville passed away Monday July 1, 2019, in Sycamore. He was born May 19, 1935, in Chicago the son of William and Helen (Barabas) Wilk. Bill serviced in the US Army from 1954 to 1956. He married Florentine F. (Kovas) Foose on Dec. 29, 1979, in Algonquin and they moved to Hampshire in 1995. Mr. Wilk was a longtime carpenter specializing in home and commercial construction. He was a member of the St. Charles Borromeo Catholic Church in Hampshire and previously of St. Monica Catholic Church in Carpentersville. He was named “Man of the Year” while at St. Monica’s. He was also a member of the Holy Name Society and American Legion Post #680 in Hampshire as well as the Knights of Columbus. Bill was a generous and giving person and would do anything to help a friend. He will be deeply missed by his wife, Dr. Florentine “Flo”; children, Brian (Eva) Wilk, April (Danny) Neill, Robert (Michelle) Wilk, James Wilk, Linda (Robert) Niedrich, Dawn (Jeff) Maynen; 4 grandchildren; 8 great-grandchildren; a brother, Donald Wilk; many nieces, nephews, and extended family. He is preceded in death by his parents; a sister, Betty O’Hara; and a son, George Foose. The Mass of Christian Burial will be celebrated at 10 am Monday July 8, at the St. Charles Borromeo Church, 297 E. Jefferson Ave., Hampshire. Burial with Military Honors will follow in the St. Charles Borromeo Cemetery. Visitation will be Sunday from 3 to 7 pm at the church. Memorial contributions in his name may be directed to the St. Vincent DePaul Society. Information (847)683-2711 or online at www.fredrickfuneralhome.com

The family of William Joseph Wilk Jr. created this Life Tributes page to make it easy to share your memories.

Send flowers to the Wilk family.